Carey Price knows the Montreal Canadiens have a daunting task ahead of them to earn a playoff spot, but he believes the team can rise to the challenge.

“We’ve overcome obstacles and odds all season long so we’ve always been able to respond well,” the veteran netminder said after practising Friday for Saturday’s game in Winnipeg against the Central Division-leading Jets.

“We have a lot of character in this room. We’ve always responded well to a challenge.”

Montreal (41-29-8) is coming off a 6-2 loss Thursday to Columbus, a club it’s tied with at 90 points in a tight race for a wild-card spot in the Eastern Conference.

The Blue Jackets currently hold the second wild card and have played one less game than the Canadiens. Carolina is one point ahead of the pair, and like Columbus has also played 77 games.

The Blue Jackets easily defeated the Canadiens 6-2 on Thursday, as the battle for a playoff spot intensifies. 1:22

The Canadiens close out the regular season with games against four playoff-bound teams. After Winnipeg, Montreal hosts league-leading Tampa Bay, goes to Washington to face the defending Stanley Cup champions and then wraps it up at home against rival Toronto.

Montreal could use some help from the teams around them, but head coach Claude Julien isn’t relying on that.

“That would help to have some help,” Julien said. “But at the same time, I don’t want our team not do their job and hope somebody does it for them.

“That’s where I’m going with our hockey club. I’d like to see us take control of our own destiny in the games we have left.”

There’s been a bit of a mindset players have nothing to lose and that can be good and bad, Price said.

“I think there’s always that fine line,” said the goalie, who’s 4-1-1 in his last six starts. “You don’t want to be too loose, but you definitely don’t want to be playing uptight. You’ve got to play with a loose body and tight minds.”

The Jets (45-28-4) have lost two straight games and three of their past four. They let a 4-2, third-period lead evaporate Thursday as the New York Islanders scored three straight goals, including a pair 33 seconds apart in the final two minutes.

Winnipeg leads its division, two points up on Nashville before the Predators play in Pittsburgh Friday night.

“I think both teams are going to be pretty desperate, pretty hungry,” Canadiens forward Brendan Gallagher said. “It should be a fun game to watch, hopefully a fun game to play.”

The Jets could have veteran defenceman Dustin Byfuglien back in the lineup after he missed 19 games with an ankle injury. 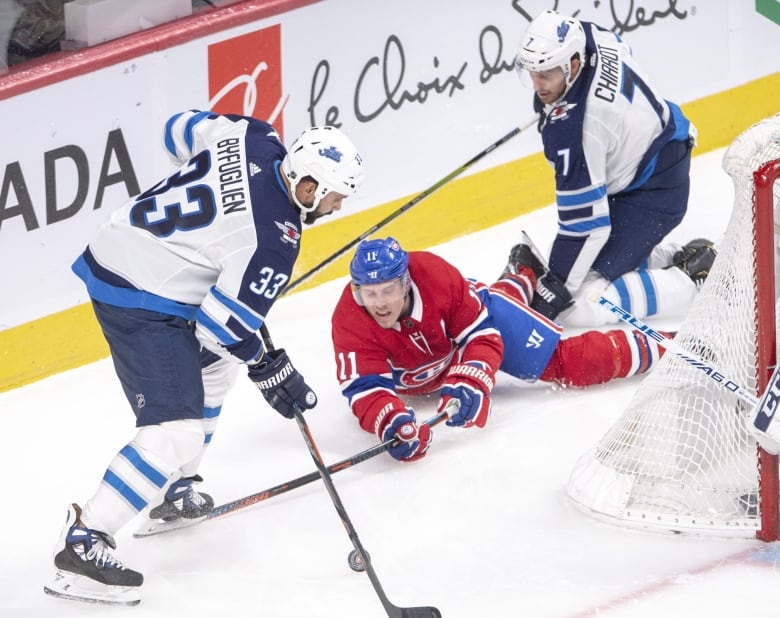 The Winnipeg Jets hope to have defenceman Dustin Byfuglien (33) back in the lineup for Saturday’s game against Montreal. Byfuglien has missed 19 games with an ankle injury. (Ryan Remiorz/Canadian Press)

“I know he’s a huge part of that team and he’s one of the best defencemen in the league so, of course, it’s going to help and it’s going to be a spark (for the Jets), but it’s not really something that we’re too focused on,” Montreal centre Max Domi said of the big blue-liner.

Canadiens forward Andrew Shaw will remain in the lineup after the NHL didn’t have a hearing following his open-ice hit on defenceman Adam McQuaid in the Columbus game.

McQuaid was clipped in the head and fell to the ice. He missed the rest of the game and Shaw got a minor penalty for interference. McQuaid reportedly didn’t travel with the Blue Jackets for their Saturday game in Nashville.

“I was watching our player come towards me and my route was to go that way and by the time I picked up my head to look, he was coming the same way that I was going and I kind of just flinched,” Shaw said.

“It was an accident, for sure. I feel bad. I sent him a message, sending him my best wishes, obviously.”

The Habs will have to shake off their inconsistency this month. In their past eight games, they lost two straight, ran up a three-game win streak, fell to Carolina in overtime, beat Florida and then got crushed by Columbus.

“You have to bounce back from a loss and we needed to park that one yesterday,” Julien said. “Right now, we’re not eliminated. We’re still in the race, we’ve got four tough games starting (Saturday) and we can only win one at a time.”