Artturi Lehkonen and Max Domi scored third-period goals to give the Canadiens a 4-2 win over the league-best Tampa Bay Lightning on Tuesday night, keeping the Canadiens within reach for a wild-card spot in the Eastern Conference.

Montreal and Columbus both have 94 points and two games apiece to play in the regular season. But the Blue Jackets currently hold the last wild card and own the tiebreaker, with the Habs currently sitting out of the playoffs.

Steven Stamkos and Cedric Paquette scored for the Presidents’ Trophy-winning Lightning (60-16-4), who were playing their third game in four nights.

Tampa’s third-string goalie Edward Pasquale made 41 saves on 45 shots in his second career NHL game. Starter Andrei Vasilevskiy was on the bench after playing Monday while backup Louis Domingue is out with a lower-body injury.

Montreal is even with the Blue Jackets after Columbus lost 6-2 to the Boston Bruins on Tuesday. Both teams are one point back of the Carolina Hurricanes, who beat the Toronto Maple Leafs 4-1.

With the Canadiens’ season potentially on the line in a 2-2 game, it took a remarkable display of hand-eye coordination for Montreal to take the lead when Lehkonen batted the puck out of mid-air, twice, to beat Pasquale at 7:47 of the third.

Domi made it 4-2 three minutes later on a partial break on blown coverage by the Lightning.

It was a bad start for the Canadiens, who fell behind just 2:28 in the game on an unlucky play. Seconds after Domi turned the puck over in his own zone, Stamkos’s shot from the corner of the ice bounced off Domi’s skate past Price.

The Lightning were 39-3-3 when they score first.

Montreal responded by putting immense pressure on Pasquale, who looked shaky between the pipes to start the game.

Thompson’s first in a Canadiens uniform made it a 1-1 game at 12:23 of the first. After Montreal’s dump-in ricocheted off a referee, Paul Byron found Thompson in the slot for the equalizer. 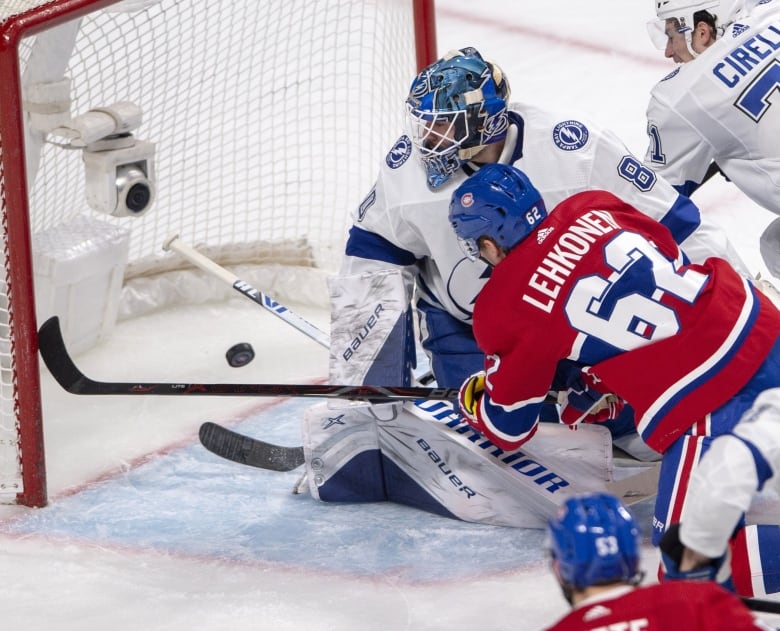 The Canadiens kept pressing but Pasquale grew in confidence with every save.

The 28-year-old Toronto native denied Brendan Gallagher with the glove on the breakaway before stopping Byron on a break exactly one minute later.

The Lightning thanked their goalie by taking a 2-1 lead 4:18 into the second period through Paquette’s 13th of the year.

Armia brought Montreal level again on a superb individual effort at 7:32 when he split the Tampa defence and fired his own rebound past Pasquale from a tight angle.

Both goalies traded outstanding saves in the third period to keep their teams in the game. Gallagher hit the post five minutes into the frame.