Joel Armia scored in the fifth round of the shootout to lift the Montreal Canadiens over the New York Islanders 4-3 on Monday night.

Max Domi and Jonathan Drouin each had a goal and an assist, Artturi Lehkonen also scored and Noah Juulsen added two assists. The Canadiens rallied from two goals down to win for the fifth time in the last six meetings with the Islanders.

Antti Niemi started in place of Carey Price and made 21 saves before stopping all five of New York’s attempts in the shootout. Montreal has won seven of 11 (7-3-1).

Casey Cizikas scored twice and Valtteri Filppula also had a goal for the Islanders, who snapped a season-high five-game winning streak. Thomas Greiss stopped 32 shots and the first four skaters in the tiebreaker.

The Islanders went on the power play with 27 seconds left in regulation when the Canadiens were caught with too many men on the ice but came up empty on the power play for the fourth time in the game. The Islanders had two chances skating 3-on-3 in OT, but Niemi stopped Josh Bailey’s wrist shot from between the circles with 3 1/2 minutes left and then denied Anders Lee’s tip try 13 seconds later.

Montreal rallied from a 3-1 deficit after one period, and tied it at 7:43 of the third when Lehkonen scored on a tip in front on a long shot by Juulsen.

Trailing by two after 20 minutes, the Canadiens came out with increased intensity in the second. They outshot the Islanders 15-6 and pulled within one with a power-play goal late in the period. With the Islanders’ Scott Mayfield off for tripping, Domi fired a shot from the right circle that beat a screened Greiss on the goalie’s blocker side with 4:24 remaining. It was Domi’s eighth goal and team-leading 15th point. 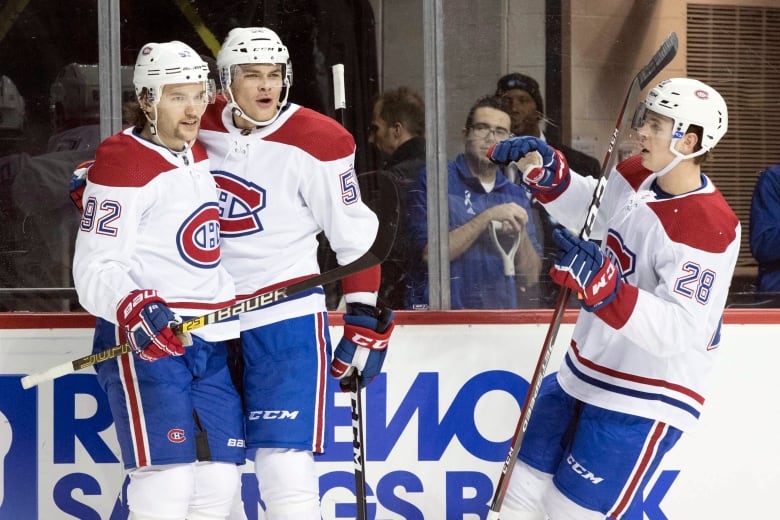 Montreal Canadiens centre Jonathan Drouin, left, celebrates with his teammates after scoring a goal in the first period of a game against the New York Islanders on Monday. (Mary Altaffer/The Associated Press)

The Islanders got on the scoreboard first when Cizikas knocked in a loose puck off a rebound of Adam Pelech’s shot from above the left faceoff circle 4:04 into the game for his first goal in eight games.

The lead lasted less than two minutes. Drouin got a pass from Domi and beat Greiss from the left circle for his fourth at 5:59.

Filppula regained the lead for New York just 1:45 later. Komarov stole the puck from Brendan Gallagher and skated up the left side on a 2-on-1 rush, went around a sliding Canadiens defenceman and passed it in front to Filppula, who beat Niemi glove side with his fifth.

Cizikas skated up the left side on a 2-on-1 with Ross Johnston and tried to send a pass to his teammate. It deflected back to him off the skate of Montreal’s Jordie Benn, and Cizikas beat Niemi for his fifth. It gave him his first multigoal game since Oct. 7, 2017, against Buffalo.