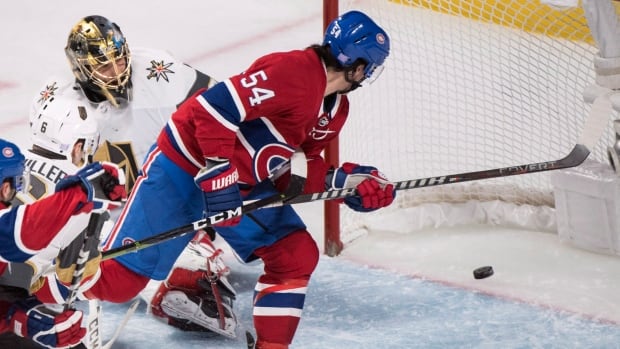 Andrew Shaw scored twice and Tomas Tatar netted the third-period winner as the Montreal Canadiens came from behind to defeat the Vegas Golden Knights 5-4 on Saturday night in Max Pacioretty’s return to Montreal.

Charles Hudon and Jesperi Kotkaniemi also scored for the Canadiens (9-5-3), who snapped a two-game losing skid. Max Domi had two assists to extend his point streak to six games.

Pacioretty gets a standing ovation in return to Montreal:

The former captain received a warm welcome after being traded to Vegas in September. 2:08

Former Canadiens captain Pacioretty was kept off the score sheet despite taking nine shots on goal in his first game at the Bell Centre as a visiting player.

Pacioretty was dealt to the Golden Knights in the off-season in return for Tatar, prospect Nick Suzuki and a second-round draft pick. The 29-year-old was given a standing ovation following a video tribute prior to puck drop.