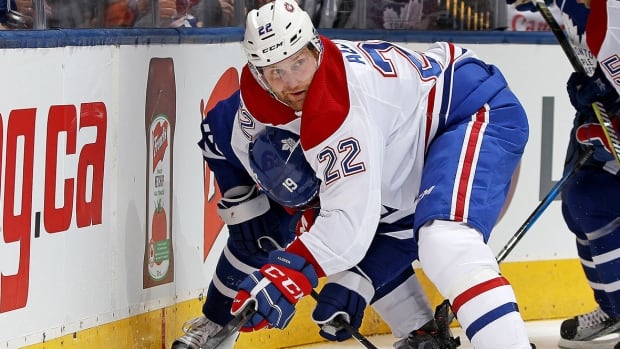 Defenceman Karl Alzner and centre Tomas Plekanec will not dress for the game at Scotiabank Arena.

The decision will end Alzner’s consecutive-games streak at 622, fourth among active players. Plekanec, meanwhile, will have to wait a bit longer to play his 1,000th career game — he is currently at 998.

“They’re never easy decisions,” Canadiens coach Claude Julien said. “I think it’s pretty obvious that there’s two things happening there to those players, but I think at the end of the day we’re all mandated to do what’s best for the team first.

“That doesn’t mean we don’t sympathize with certain things, but at the end of the day that’s what we’re all here for, including those players.”

Plekanec, 35, re-signed with the Canadiens this summer after getting dealt to the Leafs at last year’s trade deadline.

Alzner, 30, signed a five-year deal with Montreal last summer. He broke into the league with the Washington Capitals in 2008.

Canadiens forward Max Domi, who will make his regular-season debut for Montreal on Wednesday, acknowledged it’s not easy to stay in the lineup.

“It’s the best league in the world,” Domi said. “No one’s safe for a job, but at the end of the day that’s what makes it so fun — you’ve got to be ready to go every single day. No one’s getting complacent, no one’s getting comfortable.”