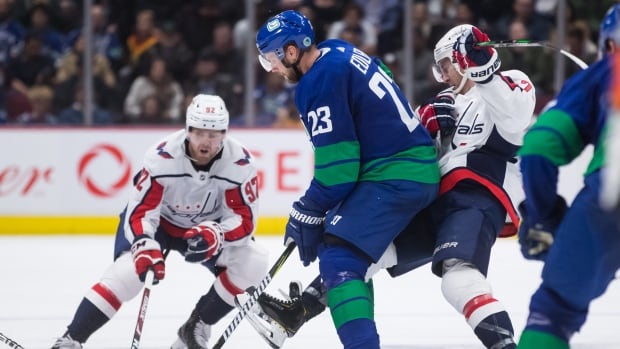 Though the Canucks (6-3-1) were up four goals late in the second period, they allowed Washington to rally late, eventually dropping a 6-5 shootout decision.

“It’s a 60-minute hockey game for a reason and[(Washington] won the Stanley Cup for a reason,” Horvat said. “They’ve got some good players over there. We had to play a full 60 to beat that squad.”

Tim Schaller scored twice for Vancouver, Brock Boeser had a goal and an assist, and Elias Pettersson and Jake Virtanen also buried the puck.

Jacob Markstrom turned away 24 shots for the Canucks.

The Capitals scored 4 unaswered goals to force overtime before beating the Canucks 6-5 in a shootout. 1:03

A fiery second period saw the squad burry a trio of chances and hold a 5-1 lead with less than a second to go in the frame.

Schaller scored his second of the night 13:59 into the period, batting a rebound out of the air and into Washington’s net.

It was the Canucks forward’s third goal of the season, equalling his output last year, when he tallied 10 points (three goals, seven assists).

“My mentality’s been get pucks to the net one way or the other,” Schaller said of the season so far.

Still, settling for a single point on Friday night was frustrating, he added.

“Just one more blocked shot, one more puck deep would have got the job done,” he said. “They came hard and we played well enough to win but they just had one more bounce than we did.”

Nicklas Backstrom sealed the comeback for Washington (8-2-3), beating Markstrom stick side in the third round of the shootout.

Evgeny Kuznetsov and Michal Kempny each put away two goals for the Capitals in regulation. The visitors also got a tally and a helper from Lars Eller.

Goalie Ilya Samsonov stopped 29 of 34 shots for Washington in his fifth start of the year.

It was a big performance for a rookie netminder, said Capitals coach Todd Reirden.

“They converted on some mistakes by us, he still made some big saves in the third and overtime and great to see him in the shootout,” he said of the 22-year-old Russian.

“He just looks so comfortable back there, give up a goal or doesn’t give up a goal, it doesn’t really change how he acts which is a rarity for young goaltender and a special presence he has. He has a really bright future ahead of him.”

Finishing strong on Friday was a big deal for Washington, Kuznetzov said.

“I feel like these types of moments, they build the team spirit and build the team together and that’s huge for us,” said the centre, who put a wrist shot past Markstrom with just 0.3 seconds left on the clock in the second period to get the comeback rolling.

“Get back from 5-1, that means a lot for guys. We stick with each other, we stick to the game plan even though the game never went well, we give up some bad goals, but we stick with our plan and we get the results.”

Reirden felt that Kuznetsov’s late tally gave his group something to work with heading into the third.

“We were able to talk about that between periods and really feel like we could build some momentum and get some opportunities if we played the right way,” he said. “we didn’t feel like we needed to cheat to get the offence but we thought we could get some chances.”

Making most of their chances

Washington scored three goals on six shots in the game’s final frame, and was outshot 32-22 by the Canucks in regulation.

During a timeout midway through the third period, Canucks coach Travis Green reminded his team to breath and pointed out that they weren’t being hemmed in their own zone.

He encouraged them to get back on the ice and win the final minutes of the contest.

“We were probably the better team the last 10 to 12 minutes of the game,” he said. “But this is one game. We got a point. We definitely wanted two. We’re pissed off we didn’t (get it), coaches, management, players. But that’s part of the league, part of the schedule. You play 82 games and you’ve got to learn from every one of them.”

Both sides now have the weekend off, with the Canucks back in action on Monday when they host the Florida Panthers. The Capitals will play the Maple Leafs in Toronto on Tuesday.