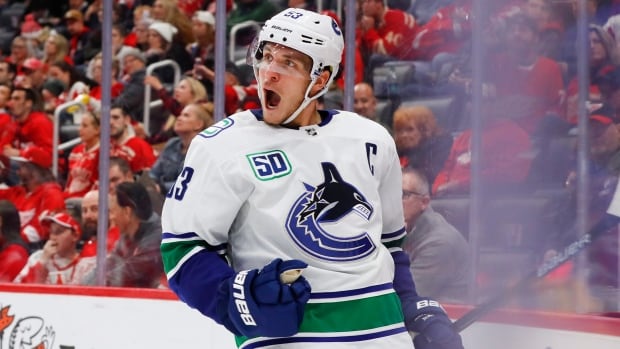 Bo Horvat scored three of Vancouver’s five goals in the third period for his first career hat trick, and the Canucks rallied from two down to defeat the skidding Detroit Red Wings 5-2 on Tuesday night.

Anthony Mantha and defenceman Dennis Cholowski scored for Detroit, which lost its fifth in a row. Jimmy Howard made 35 saves.

Virtanen got the winner when his attempted pass from the right circle deflected off the skate of Red Wings defenceman Filip Hronek and past Howard. It was Virtanen’s first goal.

Schaller added his first goal with 5:39 left and Horvat completed his hat trick with an empty-net goal with 1:12 remaining.

Mantha’s 5-on-3 power-play goal gave Detroit a 1-0 lead with 3:52 left in the first period. He scored on a one-timer from the top of the right circle. It was Mantha’s seventh goal.

Cholowski made it 2-0 at 9:19 of the second with a 4-on-3 power-play goal. He beat Markstrom with a wrist shot from the right circle. It was Cholowski’s first goal of the season.