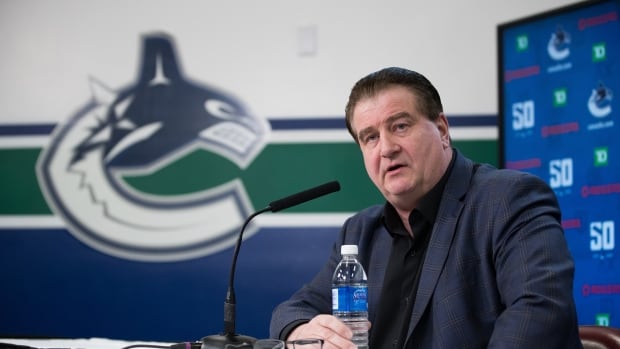 Jim Benning says his team might take its show on the road — south of the border.

The general manager of the Vancouver Canucks hinted on a conference call with reporters Wednesday that if the NHL continues to trend towards resuming the 2019-20 season this summer, the club might hold training camp in the United States because of Canada’s mandatory 14-day quarantine upon arrival for all non-essential workers.

“It’s a big concern,” Benning said. “We worry about it because that’s 14 days before we’re going to start a gruelling training camp and get into playing playoff-style games. Basically we’re telling our players that they’ve gotta sit around their homes or apartments and they can’t do the type of training that they need.

“I know that government officials are looking at it and we don’t like it, but we understand that we need to do what’s right for everybody involved and for the safety of people … that’s going to trump everything else.”

As it stands, a number of Canucks would have to adhere to Canada’s quarantine in place due to the COVID-19 pandemic. Starting goalie Jacob Markstrom and star centre Elias Pettersson have been home in Sweden, backup netminder Thatcher Demko in California, and sniper Brocker Boeser in Minnesota.

The NHL, which paused the season March 12 amid the novel coronavirus outbreak, is hoping it can move to Phase 2 of its return-to-play plan early next month with voluntary skates and workouts for small groups of players under strict health and safety guidelines. If all goes well, Phase 3 would see training camps start sometime after July 1, with Phase 4 being a return to game action later that month or in early August.

Under the 24-club framework announced by the league Tuesday, the Canucks would face Minnesota in the best-of-five qualifying round for a right to make the 16-team playoffs

“We’ve talked about it,” Benning said about a camp in the U.S. “But we just want to give it a few more days to see if something is going to change.

“In the perfect scenario, we’d like to use our facilities.”

Vancouver, Edmonton and Toronto were officially named as three of 10 potential hub cities in the running to host 12 teams if the NHL resumes this summer, but NHL deputy commissioner Bill Daly said after the NHL unveiled its return-to-play framework that current border restrictions make using Canadian markets a non-starter.

“If we’re not able to really get an interpretation of the quarantine consistent with our players ability to travel in and not have to do a strict self-quarantine in a hotel room … we won’t be in a position to use any of the Canadian cities as a hub city,” Daly said. “So we’re faced with having to find a solution to that. And hopefully we can.”

Alberta Premier Jason Kenney penned a letter Prime Minister Justin Trudeau on Wednesday in hopes of getting professional athletes and team staff classified as essential workers, similar to a move made by the U.S. government last week.

I’ve written to the PM requesting that the Govt of Canada put in place similar measures to those from the US govt to facilitate <a href=”https://twitter.com/NHL?ref_src=twsrc%5Etfw”>@NHL</a> playoffs.<br><br>Such measures, paired with Edmonton’s ideal facilities and Alberta’s rigorous health protocols, would safely make hockey possible here. <a href=”https://t.co/Gsk7tP3NUr”>pic.twitter.com/Gsk7tP3NUr</a>

British Columbia Premier John Horgan, who has also been vocal in his support of Vancouver as a hub, was more measured in response to a question about the issue.

“We have rules in place today that we worked very hard to establish,” Horgan said. “Because the NHL made an announcement that involved Vancouver, we’re not going to go rushing to change that. Two weeks from now, four weeks from now, it could be a completely different situation provided we continue to see the progress that we’ve seen.”

The NHL wants 2 cities to serve as hubs when the league resumes. Vancouver, Edmonton and Toronto are on the short list. B.C. Premier John Horgan says he’ll be at home watching games regardless of which cities are selected. 0:53

Winnipeg Jets centre and Michigan native Andrew Copp said Wednesday he won’t be returning to Canada during the voluntary Phase 2.

“I want to be on the ice, but the two-week quarantine will pretty much deter me from coming back until the start of training camp or until that gets lifted,” Copp said. “In the next week or two I might head down to Florida and start skating again because I need to be on the ice.

“That’s a total league problem … I don’t think it’s fair to ask the Canadian teams to have their players come sit in their apartments for two weeks and the American teams just get to Phase 2 and skate all day. I’m sure that competitive advantage will be discussed and figured out.”

Benning said he’s spoken to GMs of other Canadian franchises about the issue, but Winnipeg’s Kevin Cheveldayoff and Marc Bergevin of the Montreal Canadiens both indicated holding camps south of the border isn’t something they’re contemplating at the moment.

“It’s something that is out of our control,” Benning said. “It’s a government rule that’s in place that we’re gonna listen to and adhere to.

“It’s not perfect, but we’re just gonna have to make the best of everything that’s going on and figure out a way through it and prepare the best we can.”