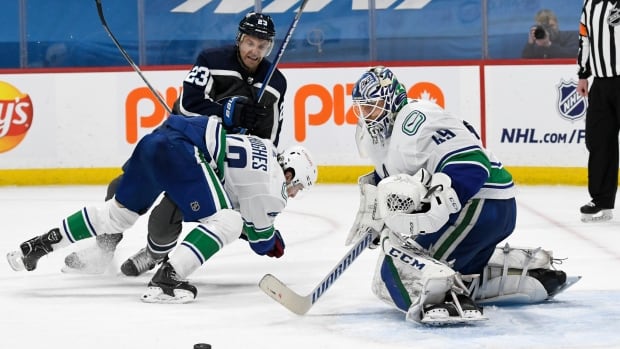 The Vancouver Canucks’ COVID-19 situation has grown worse with seven players now on in the NHL’s COVID protocols.

Canucks forward Adam Gaudette was pulled from Tuesday’s practice following a positive test result and added to the list that afternoon.

The NHL postponed the Canucks’ Wednesday matchup with the Calgary Flames after another player — later identified as defenceman Travis Hamonic — and an unnamed member of the coaching staff entered the league’s protocols.

Vancouver has now had four games postponed and the NHL says the team cannot practice before April 6.

A player on the COVID-19 protocol list has not necessarily tested positive.

The league’s protocols require players and staff to be tested daily. Any time an individual’s initial test comes back positive, the lab does a second test on the initial sample.

If the second test is negative, a second sample is collected. But if that sample returns a positive result, it’s considered to be a “confirmed positive.”

The NHL’s truncated 56-game schedule has now seen 45 contests postponed — with the first 37 coming in the three U.S.-based divisions — because of COVID-19.