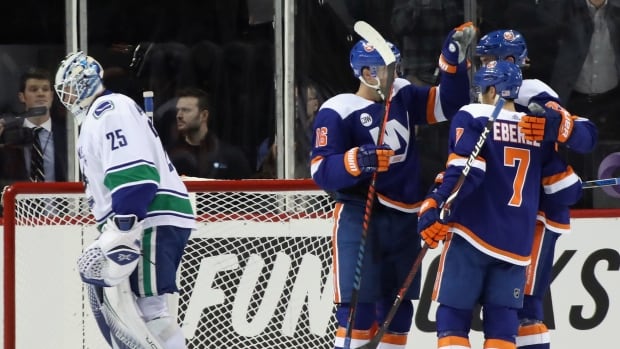 Tom Kuhnhackl scored two unusual goals to lead the New York Islanders to a 5-2 victory over the Vancouver Canucks on Tuesday night.

Jordan Eberle had a goal and an assist and Josh Bailey also scored to help the Islanders end a three-game skid. Mathew Barzal and Brock Nelson each had two assists and Thomas Greiss stopped 22 shots as New York improved to 5-0-2 in the last seven meetings against Vancouver.

Brendan Leipsic had a goal and an assist, and Jake Virtanen also scored for the Canucks, who have lost two straight after a 4-0-2 stretch. Jacob Markstrom, starting for the ninth straight game with Anders Nilsson injured, finished with 29 saves.

Kuhnhackl got his second of the game at 3:26 of the third period as Eberle’s pass from the right corner deflected off Kuhnhackl’s stick, a Vancouver defenceman’s stick, and then Kuhnhackl’s skate and in to push the Islanders’ lead to 4-2. The goal stood after a video review, giving Kuhnhackl his first career multi-goal game.

Cal Clutterbuck scored a power-play goal with 2:54 left, the Islanders’ first in four games with the man-advantage.

Trailing 3-1 after one period, the Canucks pulled within one on a power-play goal early in the second as Virtanen knocked in a rebound in front for his eighth of the season at 2:51.