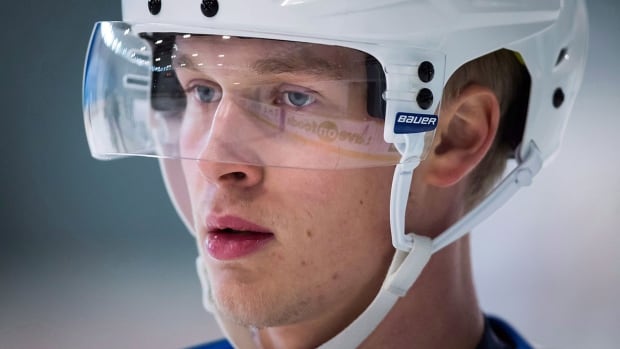 Erik Karlsson and John Tavares began anticipated new chapters with the San Jose Sharks and Toronto Maple Leafs, respectively, on opening night in the NHL, but the two superstars were overshadowed by a baby-faced Vancouver Canucks rookie.

Swedish teenager Elias Pettersson, all 165 pounds of him, scored in the first period and set up his linemate Nikolay Goldobin with a nifty pass early in the third period for a 2-0 lead en route to a 5-2 win at home against the Calgary Flames.

Vancouver beats Calgary 5-2, Elias Pettersson records a goal and an assist in his NHL debut. 1:45

The Canucks were playing their opening game without Daniel and Henrik Sedin for the first time in 18 seasons. The retired twins provided so many thrills and goals during their time in Vancouver and there was massive concern as to where the goals will come from for the Canucks in 2018-19.

Well, for one evening anyway, Pettersson came to the rescue with his two-point debut in just nine minutes and 45 seconds of ice time. The Canucks spent too much time in the penalty box, keeping the rookie Swede on the bench.

He’s not part of the penalty-killing unit that came up big by going 7-for-7. Pettersson is a key power-play performer, but the Canucks only had one man-advantage situation.

Still, in limited ice time, this kid lived up to his gamer reputation. At 19, he not only played for Sweden at both the world junior championships and world championships last season, but he also led Vaxjo Lakers HC to the Swedish league championship, won the scoring title and was named the regular-season and playoff MVPs.

Pettersson certainly spoiled the Flames’ first game and all the hullabaloo of their off-season changes that brought in seven new players and a new coach, Bill Peters.

Leafs still have work to do

Meanwhile, when the Sharks added Karlsson last month and the Maple Leafs signed Tavares on Canada Day, the two teams immediately became Stanley Cup favourites. But there will be growing pains, judging from opening night.

Tavares and the Maple Leafs were not at their best. Yes, they did beat the Montreal Canadiens 3-2 in overtime thanks to another outstanding opening-night effort from Auston Matthews. He scored twice, including the OT winner, and now has seven goals, nine points in three wins in his three curtain-raisers with Toronto.

But the Maple Leafs were outplayed and outhustled by the speedy Canadiens. Toronto lapsed for long stretches of the game as the Canadiens held a 76-60 edge in combined shots on goal, missed shots and shots blocked.

The Maple Leafs lacked an urgency in their game. It was like they had read all the positive press clippings that this would be the year they finally win a title to end the franchise’s 51-year Stanley Cup drought.

Karlsson and the Sharks were flying at times in their 5-2 loss at home to the Anaheim Ducks. But they were beaten by goalie John Gibson’s 31 saves.

San Jose falls to Anaheim 5-2, new Shark Erik Karlsson had no points and was minus-2. 0:25

Karlsson led his new team in ice time with 26 minutes and 48 seconds but had a plus-minus rating of minus-two. He was on the ice for Anaheim’s three unanswered third-period goals, including an Anaheim power-play goal in which he was caught too high to allow Jakob Silfverberg to find Adam Henrique for the 4-2 goal and Carter Rowney’s empty-netter.

A team that does not need any time to get acquainted is the defending Stanley Cup-champion Washington Capitals. Most figured Alex Ovechkin and company would have a literal hangover from all their partying, including a dip in the Georgetown Fountain with the prized trophy last June.

But after raising their Stanley Cup banner, the Capitals required only 24 seconds for T.J. Oshie to score and a few hours later they had finished off a 7-0 rout against a capable team in the Boston Bruins.

Alex Ovechkin and his Washington teammates watch as their 2018 Stanley Cup banner is raised to the rafter. 2:31

This sent a message to the rest of the league that the Capitals will be contenders once again.

Karlsson and Tavares will need time to cobble together a similar message.