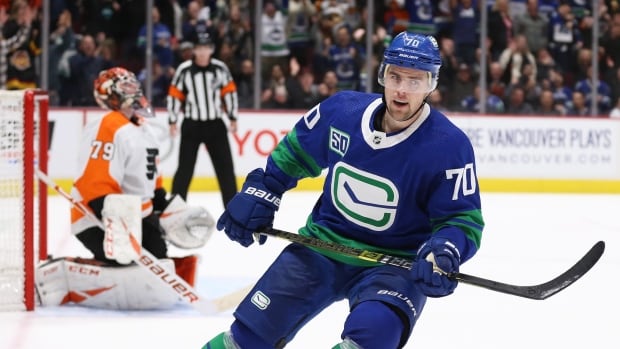 Tanner Pearson scored in the shootout to power the Vancouver Canucks to a 3-2 home victory over the Philadelphia Flyers on Saturday.

The left-winger beat Philly’s Carter Hart five-hole in the third round to secure the win.

Brock Boeser and Pearson both scored for the Canucks (2-2-0) in regulation, and Chris Tanev registered a pair of assists.

Carsen Twarynski and Oskar Lindblom scored for the Flyers (2-0-1).

Hart stopped 22-of-24 in the losing effort while Jacob Markstrom had 29 saves for Vancouver.

The loss was Philadelphia’s first of the season and marked the Flyers’ first game in North America this season after they opened the year in the Czech Republic as part of the NHL’s global series.

WATCH | Canucks come up clutch in SO to down Flyers:

The Canucks gave up a pair of leads in regulation, but came up clutch in the shootout to top the Flyers 3-2. 1:05