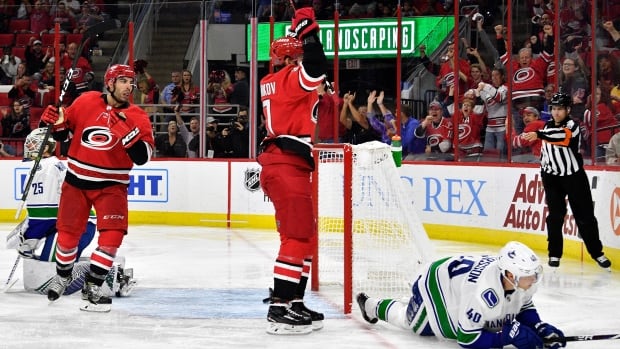 Sebastian Aho had a goal and an assist, and the Carolina Hurricanes beat the Vancouver Canucks 5-3 on Tuesday night for their third straight win.

They helped the Eastern Conference-leading Hurricanes improve to 3-0-1 — their best start since the move from Hartford in 1997 — under new coach and former team captain Rod Brind’Amour. They earned points in their first four games for the first time since 1994-95, when they were still the Whalers and opened 4-0-1.

Sven Baertschi had two goals and an assist, and Bo Horvat scored on the power play for rebuilding Vancouver, which has lost the first two games of its six-game trip.

The NHL seems a lot more fun this season:

Curtis McElhinney made 22 saves for the Hurricanes while Jacob Markstrom stopped 28 shots for the Canucks in a game in which the first seven goals were scored in the opening 23 minutes, 24 seconds and the defenses tightened up before Foegele scored with 6:12 left to restore Carolina’s two-goal advantage.

Aho, who has points in all four games, put Carolina up 3-1 after taking a slick touch pass from Micheal Ferland and beating Markstrom from close range with 2:09 left in the first.

After Horvat pulled the Canucks within a goal in the opening minute of the second period, Svechnikov restored the two-goal lead when he crashed the net and stuffed in a rebound — giving the rookie points in three of his four career games.

Baertschi’s first goal tied it at 1 at 6:12 after a long pass from Alexander Edler set up a partial breakaway chance. His second came on the power play at 3:24 of the second and pulled the Canucks to 4-3, capping a furious stretch in which the teams combined for three goals in a span of 2:38.