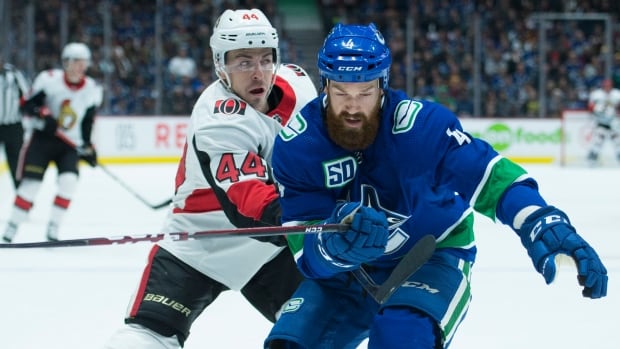 Forward Antoine Roussel scored in his first game back after being sidelined for eight months with an injury as the Vancouver Canucks defeated the Ottawa Senators 5-2 Tuesday night.

Other Vancouver goals came from Tanner Pearson, Elias Pettersson and Oscar Fantenberg. Chris Tanev and Adam Gaudette each had two assists for the Canucks who are 5-8-2 in their last 15 games.

Jean-Gabriel Pageau and Tyler Ennis scored for the Senators (11-16-1) who lost their fifth consecutive game.

Prior to the game former Vancouver forward Alex Burrows was the seventh player inducted into the Canucks Ring of Honour. In 12 years as a Canuck, Burrows played 822 games — scoring 193 goals and collecting 384 points.

The Senators outshot Vancouver 16-15 in the first period but trailed 4-0.

Roussel, who underwent ACL surgery in his right knee last March, scored on his first shift. Gaudette stole the puck near centre ice, skated into the Ottawa zone, then passed to Roussel who had an open net with just 1:50 gone in the game.

A turnover set up Pearson’s goal at 4:28. Tanev knocked down a clearing pass at the blue line then found Pearson alone at the side of the net for his eighth of the season.

Pettersson made it 3-0 on a power play at 13:58. Left alone at the side of the net he deflected home a Brock Boeser pass.

MacEwen scored at 17:23, deflecting in a Jordie Benn shot.

The Senators applied pressure in the second period, forcing Demko to make a couple big saves. He stopped Connor Brown on a breakaway and denied Pageau who was left alone in the slot.

Pageau finally scored off a scramble at 11:59.

The Senators scored just 40 seconds into the third period to cut Vancouver’s lead to 4-2 when Ennis deflected a Thomas Chabot shot.

Fantenberg, playing in just his second game as a Canuck, made it 5-2 at 7:34 with a rising shot from the blue line.