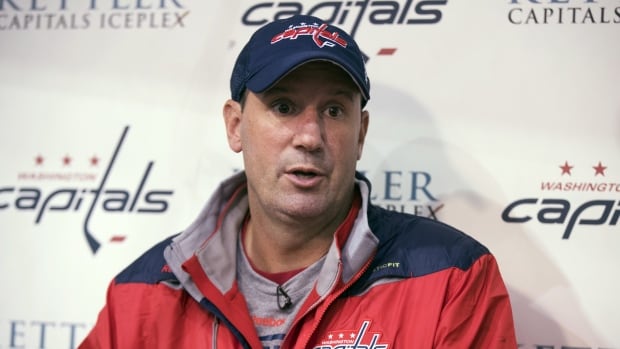 The Washington Capitals promoted Todd Reirden to head coach Friday, giving the Stanley Cup champions some continuity after the departure of Barry Trotz.

Reirden had been on Trotz’s staff the past four years, the past two as associate coach. He was the only candidate for the job after Trotz resigned June 18 and joined the New York Islanders three days later. The 47-year-old had been considered Washington’s coach-in-waiting all last season with Trotz going into the final year of his contract.

“We feel that the time is right for Todd to lead our hockey club,” general manager Brian MacLellan said. “Based on his coaching experience, communication abilities, his approach to the game and the respect he commands in our locker room, we feel that Todd has earned this opportunity.”

The 47-year-old former defenceman coached the American Hockey League’s Wilkes-Barre/Scranton Penguins for parts of two seasons before serving as an NHL assistant with Pittsburgh for four years. Reirden was a finalist for the Calgary coaching job two summers ago but after losing out to since-fired Glen Gulutzan was given a raise and the associate coach title by the Capitals.

Reirden coached Washington’s defencemen and had a hand in the development of John Carlson, Matt Niskanen and Dmitry Orlov, helping the Caps capture the first Stanley Cup in franchise history.

“I thought he was crucial for my career and just changed kind of a few things how I looked at the game, changed a few things with the D that I think really benefited everyone on D and made it pretty clear what he expected of us and allowed us to go out there and do the rest,” Carlson said after signing a $64 million, eight-year contract to stick around.

MacLellan said last week this was Reirden’s job to lose.

“He’s got history there and he’s ready to try it as a head coach, and he’s been successful with our defencemen,” MacLellan said. “I think he can handle the personalities in our room.”

Reirden takes over a defending champion led by captain and playoff MVP Alex Ovechkin, who was motivated by Trotz to adapt his game at age 32. He is the first assistant to take over for a Cup-winning coach the next season since Dave Lewis replaced the retired Scotty Bowman with Detroit in 2002-03 and the first to follow a champion coach who left in a contract dispute since Colin Campbell replaced Mike Keenan with the New York Rangers in 1994-95.​

Current and past players praise Reirden for his ability to not only strategize but communicate. As the NHL moves away from taskmasters behind the bench, Reirden fits the mould of a modern coach.

“I think he did a great job taking everybody for being different people and seeing things different ways,” Carlson said. “I just think he seemed to connect with everyone’s different personalities. I think he makes you look at the game a little bit differently.”