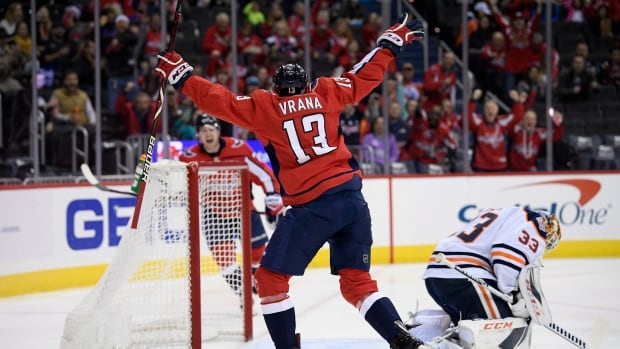 Alex Ovechkin scored on the power play, backup goaltender Pheonix Copley made 31 saves and the Washington Capitals ended their two-game losing streak by beating the Edmonton Oilers 4-2 on Monday night.

The defending Stanley Cup champions came out flying two days after a mistake-filled overtime loss to Dallas. Jakub Vrana scored on his first turn with the fourth line after being demoted, and linemate Devante Smith-Pelly scored on the group’s second shift a few minutes later as the Capitals jumped all over Cam Talbot and the Oilers.

Ovechkin’s 11th goal of the season was his 234th career on the power play, tying him with Marcel Dionne for eighth on the career list. T.J. Oshie also scored by firing short-side on Talbot, who allowed four goals on 23 shots in his first start since Oct. 30.

Oilers captain Connor McDavid extended his point streak to eight games with his 10th goal of the season. Leon Draisaitl scored for Edmonton, which lost for just the second time in seven games.

Copley stopped all 11 shots he faced in the third period of a surprise start over Braden Holtby and picked up his second NHL victory. He benefited from playing behind an angry Capitals team that blew a lead last week at Montreal and was eager to get back on track amid an inconsistent start to the season.

Washington in particular did a good job defending McDavid at even strength, bottling up the reigning Art Ross Trophy winner and limiting his scoring chances. McDavid is now two points back of Colorado’s Mikko Rantanen for the league lead.