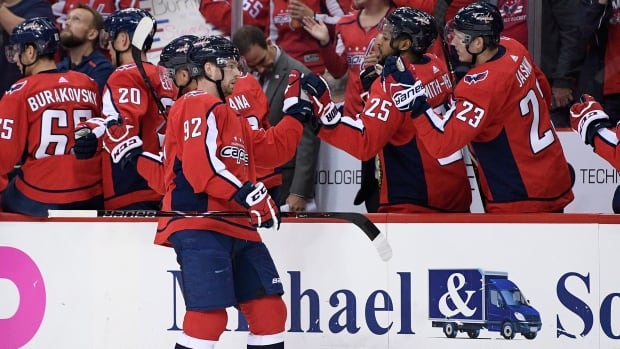 Evgeny Kuznetsov continued his dominance against the Vegas Golden Knights, scoring a goal and assisting on three more as part of a 5-2 Washington Capitals victory Wednesday night in a rematch of last season’s Stanley Cup Final.

Kuznetsov assisted on two goals by Alex Ovechkin and one by Nicklas Backstrom and scored his own on the power play. The leading scorer in the Cup Final with eight points in five games, Kuznetsov has seven points through the defending champions’ first three games of the regular season.

Coming off a 49-goal season and a Conn Smythe Trophy as playoff MVP, Ovechkin has four goals in three games. The 610th and 611th goals of his career put him in sole possession of 17th on the NHL’s career list, passing Bobby Hull.

Braden Holtby, who made “the save” with his stick in Game 2 of the Final, stopped 29 of 31 shots and bailed out his teammates during an especially sloppy second period. Holtby allowed goals to Cody Eakin in the second period and Reilly Smith in the third.

Vegas goaltender Marc-Andre Fleury, who wanted to start this game instead of facing his former team in Pittsburgh on Thursday night, allowed four goals on 28 shots. His teammates hit the post a handful of times and went 0 for 3 on the power play and are 0 for 11 so far this season.

The Golden Knights fell to 1-3-0 at the beginning of their second season. They didn’t lose their third game in their inaugural season until Halloween when they started 8-3-0.