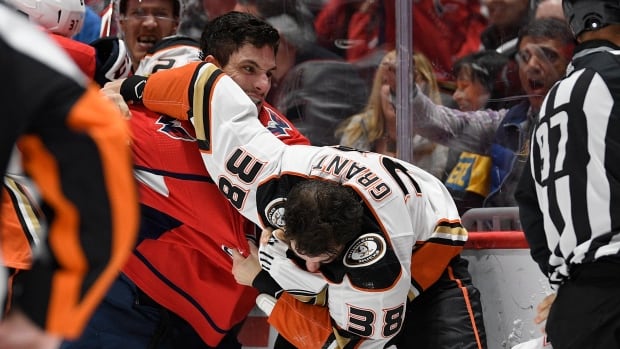 Washington Capitals forward Garnet Hathaway has been ejected from a game for spitting on a player from the Anaheim Ducks.

Hathaway spit on defenceman Erik Gudbranson during a brawl late in the second period Monday night with referee Peter MacDougall standing a few feet away. Officials reviewed video before confirming the five-minute match penalty that triggers a game misconduct.

Chaos erupts behind the Anaheim net after Brendan Leipsic levels Derek Grant and Chandler Stephenson scores. Garnet Hathaway gets a match penalty for spitting on Erik Gudbranson <a href=”https://t.co/azj6YazNTM”>pic.twitter.com/azj6YazNTM</a>

Tempers flared during the first 40 minutes between Washington and Anaheim and boiled over with 33.4 seconds remaining in the second. Capitals forward Brendan Leipsic bulldozed the Ducks’ Derek Grant behind the net, sparking several fights between the teams’ fourth lines.

Hathaway was involved with Grant, Gudbranson and Nick Ritchie during the scrum before being thrown out.