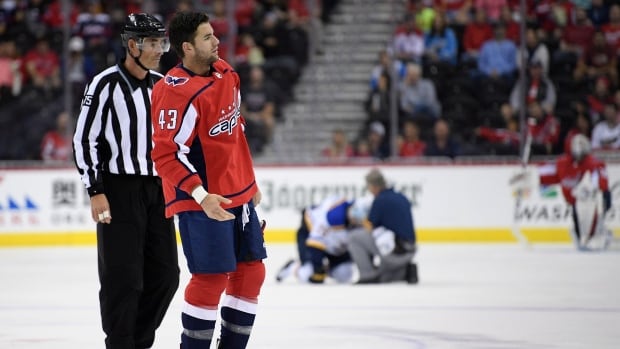 Washington Capitals right winger Tom Wilson could face a suspension of six or more games for a blindside hit to the head of St. Louis Blues centre Oskar Sundqvist during a preseason game on Sunday.

The NHL’s Department of Player Safety announced in a tweet Sunday night that it has offered Wilson an in-person hearing for the infraction, which earned him a 10-minute penalty during the game. That means the league is considering a suspension of six-plus games.

“I’d be surprised if he didn’t miss a decent amount of time,” Yeo said of Sundqvist.

The Capitals did not make Wilson available to reporters after the game.

Wilson, who signed a six-year, $31 million US contract in July to remain with Washington, has a history of throwing dangerous checks. He was suspended for three games during the Stanley Cup playoffs for a check to the head of Pittsburgh Penguins centre Zach Aston-Reese that broke his jaw and caused a concussion.