Washington Capitals forward Evgeny Kuznetsov took part in Friday’s optional skate, although his status for Game 3 of the Stanley Cup Finals against the Vegas Golden Knights remains in doubt.

Kuznetsov is day-to-day due to an unspecified injury, head coach Barry Trotz announced Thursday, declining to give further details on the injury.

Kuznetsov was hurt when Golden Knights defenseman Brayden McNabb hit Kuznetsov hard against the boards late in the first period of Game 2 on Wednesday night.

Kuznetsov stayed down for a moment and appeared to be holding his left arm and hand in pain as he left the ice. He did not return, ending an 11-game point streak that began in the second round of the playoffs. The Capitals won the game 3-2 to even the series.

Trotz had said he was unsure if the top-line center would take part in Friday’s skate ahead of Game 3 in Washington D.C. on Saturday night.

McNabb’s hit was not penalized, but Trotz told reporters after Wednesday’s game, “We thought it was high.”

“You lose one of your top players on what we feel is a questionable hit,” Trotz said. “The league will look at it. But your bench rallies around it.” 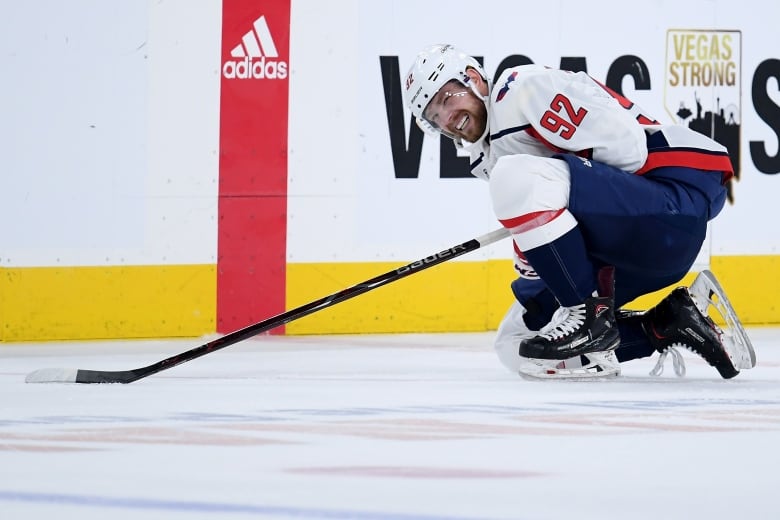 Washington’s Evgeny Kuznetsov clutches his arm after taking a hit from Vegas’ Brayden McNabb during Wednesday’s Game 2 of the Stanley Cup Final. Kuznetsov left the game and did not return. (Harry How/Getty Images)

No news of any possible discipline toward the defenseman has been announced or reported.

Kuznetsov, 26, leads the NHL in points this postseason with 25, one ahead of linemate Alex Ovechkin. He totaled 27 goals and 83 points during the regular season, both second on the team to Ovechkin, and his 56 assists led the squad.

After averaging 18:49 of ice time in the regular season, Kuznetsov has averaged 20:36 through 21 playoff games despite leaving after 4:26 of ice time in Game 2.