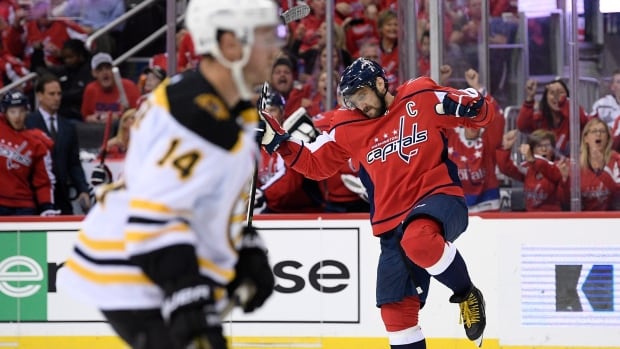 Alex Ovechkin and the Stanley Cup champion Washington Capitals opened their title defence with a 7-0 thrashing of the Boston Bruins on Wednesday night.

After watching the franchise’s first Stanley Cup banner ascend to the rafters, T.J. Oshie opened the scoring just 24 seconds in, and Evgeny Kuznetsov scored the first of his two goals 1 1/2 minutes later to get the rout off to a fast start. It was the fastest first two goals by a defending champion in a season opener in NHL history — and it was just the beginning.

Alex Ovechkin and his Washington teammates watch as their 2018 Stanley Cup banner is raised to the rafter. 2:31
By midway through the second period, the Capitals chased goalie Tuukka Rask with five goals on 19 shots and ignited chants of “Back-to-back! Back-to-back!” from the fired-up crowd. Braden Holtby stopped all 25 shots he faced to improve to 15-2 with four shutouts against the Bruins.
The emotional banner ceremony featured montages from the Capitals’ playoff run and ensuing celebrations and a roar when Ovechkin carried the freshly engraved Cup onto the ice and skated a lap with it. Minutes after Ovechkin kissed the Cup and put it back in its box, he and his teammates blew away any concern about an emotional letdown and began making a statement that they want to win it back.

In Todd Reirden’s first game as coach, the Capitals beat the Bruins for the 13th consecutive time, this time without Tom Wilson. Washington’s top-line right winger began his 20-game suspension for another illegal check to the head of an opponent in a pre-season game.

The Capitals have outscored the Bruins 48-19 during this winning streak.

Ovechkin scored one of four power-play goals, Kuznetsov scored his second on the power play and John Carlson beat Boston backup Jaroslav Halak on a 5-on-3 advantage. Newcomer Nic Dowd joined the fun with a spinning back-hander, and Cup-clinching goal-scorer Lars Eller added the exclamation point with the seventh of the night.

Rask fell to 1-11-5 in his career against the Capitals with a 3.30 goals-against average and .889 save percentage that are each the second-worst of any opponent. Only two goals came against Halak, whose presence on banner night in Washington was poetic after his performance for Montreal in the 2010 playoffs ended one of the Capitals’ previous best chances to win a championship.