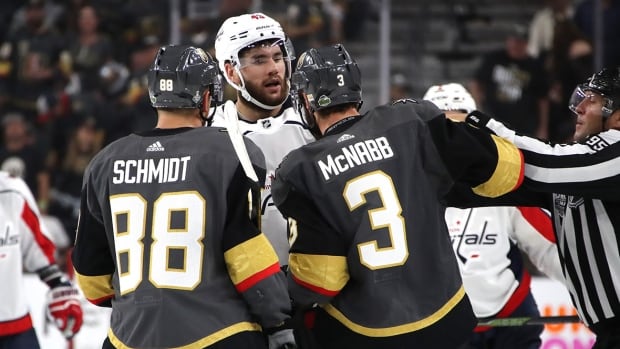 Tom Wilson has escaped the long arm of the NHL law. This time at least.

The Washington Capitals forward found himself in hot water for the second time in these playoffs after levelling Vegas star Jonathan Marchessault with a questionable open-ice hit during Game 1 of the Stanley Cup Final.

Wilson was up to his old tricks in Game 1 of the Stanley Cup Final. 1:25

The hit, which happened about six minutes into the third period and with the score tied 4-4, came well after Marchessault had given up the puck. He did not appear to see Wilson approaching.

ESPN reported Tuesday that the the NHL’s Department of Player Safety did not deem the hit worthy of suspension, saying it was shoulder to shoulder and within the flow of the game.

Another look at Wilson’s hit on Marchessault <a href=”https://t.co/f7CxFarqEf”>pic.twitter.com/f7CxFarqEf</a>

Marchessault went to the Golden Knights’ dressing room for concussion protocol testing but was cleared to return and came back to finish the game, which Vegas won 6-4.

Wilson, who received a two-minute penalty for interference on the play, later called it a “good, clean hit.”

Marchessault disagreed, calling it “a late hit” and expressing hope the league would “take care of it.”

Wilson was previously banned for three games during Washington’s second-round series against Pittsburgh for a head shot that broke the jaw of Penguins rookie Zach Aston-Reese.

Capitals’ winger Tom Wilson was back at it again in Game 3 with a massive hit on Zach Aston-Reese forcing him to leave the game. 1:06

Wilson was also forced to sit out two pre-season games and the first four games of the regular season for separate hits on two different St. Louis players.

Game 2 of the Stanley Cup Final goes Wednesday in Vegas.

Gerard Gallant in media briefing now, asked about Wilson not facing any supplemental discipline for the hit on Marchessault: says it was a late hit, borderline hit, wished it would have been a major. But says flip side is he feels that hit woke up his team