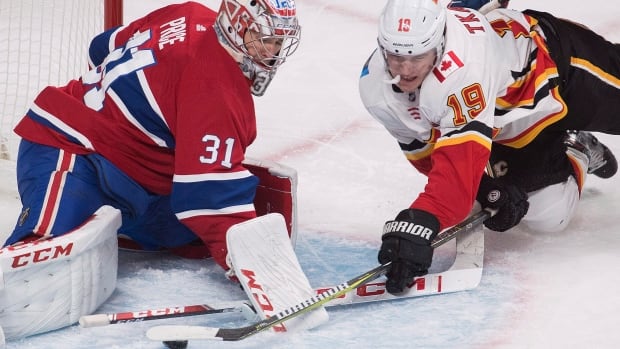 Jeff Petry and Jonathan Drouin each scored and added an assist as the Montreal Canadiens edged the Calgary Flames 3-2 on Tuesday night for their fourth win in their last five games.

Brendan Gallagher also scored for the Canadiens (5-1-2). Carey Price made 21 saves as he tied Patrick Roy for second in team history for most wins by a goaltender with 289.

Michael Frolik and Elias Lindholm scored for the Flames (5-4-0) while David Rittich made 37 saves in defeat. The Czech goalie was making his second consecutive start after stopping 44 shots in a 4-1 victory his last time out.

The Flames jumped to a 1-0 lead at 16:46 of the first period when Matthew Tkachuk’s shot bounced off Frolik’s skate past Price.

Rittich was outstanding to start the game and he did what he could to preserve Calgary’s lead. At one point, the 26-year-old made four saves on four different Canadiens players in a two-second span in the second period.

But Montreal was relentless in the second, aided by four consecutive Calgary penalties, as the home team scored three times in a 3:21 span.

With TJ Brodie in the box for interference, Rittich finally met his match when Petry fired a one-timer from the faceoff dot at 15:50. The point was Petry’s 100th in a Canadiens uniform.

Again playing with the man advantage, the Canadiens made it 2-1 after Gallagher redirected Petry’s sharp pass behind Rittich at 17:29.

With 49 seconds left in the second, Drouin found some daylight between Rittich’s arm and his post as the winger extended his point streak to five games.

Lindholm got one back for the Flames at 11:10 of the third as he finished off a give-and-go with Mikael Backlund for his team-leading sixth goal of the year.

Defenceman Victor Mete was back in the lineup, which meant Karl Alzner was a healthy scratch for the sixth time this season.