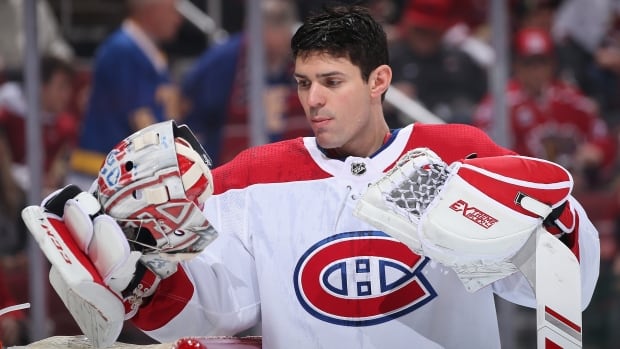 Montreal Canadiens star goaltender Carey Price is expected to return to the lineup on Thursday night against the visiting Vancouver Canucks.

But after missing the past three games with a lower-body injury, it’s not certain whether Price will start or back up Antti Niemi.

“I’m going to see how things go [Wednesday night] and see how I recover going into [Thursday],” Price said after returning to practice on Wednesday. “If everything goes well, I’d imagine playing.”

Price, whose wife gave birth to their second daughter last week, said he suffered the injury about seven weeks ago, but played through the pain until the Canadiens’ three-game road trip to Florida, Tampa Bay and Dallas.

“I’m feeling pretty good,” he said. “Obviously, it’s nice to get some time off and get things settled down and start feeling normal again.”

The Canadiens went 2-1 on the road swing with Niemi in net for all three games.

With Price ready to return, the Canadiens sent goalie Michael McNiven back down to AHL Laval.

“It’s more about [Thursday], how he’s going to feel [Thursday],” Canadiens coach Claude Julien said. “That’s the big question. At this stage, what I’m being told, worse comes to worse he could always be a backup goaltender [Thursday] … The bottom line is after one practice and having just finished it, I can’t stand here and say he’s my goalie [Thursday].”