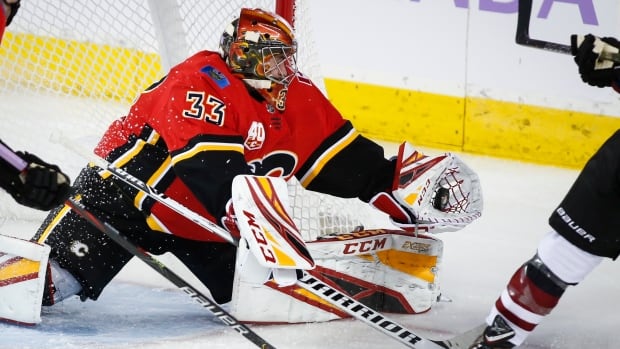 Matthew Tkachuk scored the overtime winner for the Calgary Flames in a 4-3 victory over the Arizona Coyotes on Tuesday.

Trailing 3-1 late in the third period, Calgary’s Tkachuk and Mark Giordano scored in a 59-second span to send the game to overtime.

Tkachuk produced the winner with 33 seconds remaining in extra time.

Antti Raanta got the start for Arizona after Darcy Kuemper picked up the OT win the previous night in Edmonton. The Finn posted 39 saves in the loss.

Giordano threaded a low shot through traffic to score stick side at 17:19 of the third period. Tkachuk beat Raanta with a shot from the top of the circle for a power-play goal at 16:30.

Hinostroza pounced on a turnover behind Calgary’s net and beat Rittich’s glove at 10:31 for his first of the season.

Gaudreau halved a 2-0 deficit with a power-play goal at 17:16 of the second period. The winger ended Calgary’s 0-for-13 drought with a man advantage.

With Carl Soderberg serving a hooking penalty, Gaudreau redirected a Tkachuk cross-ice pass by Raanta to end a 12-game streak without a goal.

After Raanta rebuffed a breaking Mark Jankowski to open the period, Dvorak tipped an off-speed Phil Kessel shot past Rittich at 4:09.

Rittich denied Michael Grabner on a breakaway with his right pad with two and a half minutes remaining in the period.

Keller scored for the visitors at 8:29 when Calgary turned the puck over in its zone near the blue-line. Nick Schmaltz in the high slot dished to Keller for a top-shelf, one-timer.

Schmaltz, 23, collected his team-leading 14th point of the season.

Calgary is at home to the New Jersey Devils and the Coyotes host Columbus on Thursday.