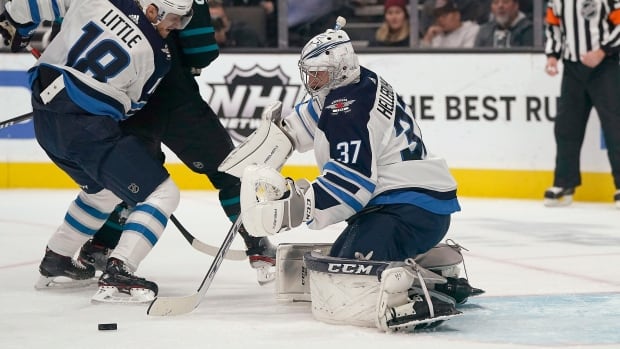 Connor Hellebuyck made 51 saves to hold off a furious San Jose attack and Nikolaj Ehlers scored the tie-breaking goal with 1:24 left to send the Winnipeg Jets to a 3-2 victory over the slumping Sharks on Friday night.

Blake Wheeler and Gabriel Bourque also scored for the Jets, but Hellebuyck was the biggest star with Winnipeg spending much of the game hemmed into its own zone.

Tomas Hertl and Barclay Goodrow scored for the Sharks, who lost their fourth straight game. Martin Jones made 16 saves.

After getting outscored 14-4 in losing the final three games of a road trip, the Sharks looked to get back on track in the opener of a six-game homestand. They responded with perhaps their best game of the season, but it wasn’t enough thanks to Hellebuyck and the late goal from Ehlers.

Jack Roslovic set up Ehlers after the Sharks turned the puck over in their own zone, and he beat Jones with a one-timer for the improbable game-winner.

The Sharks had scored the equalizer 48 seconds into the third period when they had an extra skater on the ice because of a delayed penalty. Kevin Labanc got the puck to Evander Kane, who sent a shot toward the net that Hertl re-directed past Hellebuyck.

There was a big momentum turn midway through the second period. The Sharks appeared to take a 2-1 lead when Kane played the puck in front from behind the net. It bounced around and Kane ended up with it, knocking it in to the delight of the crowd.

But Jets coach Paul Maurice challenged the play for goaltender interference, and the goal was wiped off because Kevin Labanc hit Hellebuyck’s pad with his stick right before Kane scored.

Making matters worse for the Sharks was the fact that the Jets scored at the other end 31 seconds later when Mark Scheifele found Wheeler alone in transition.

The Sharks put on heavy pressure the rest of the period but couldn’t score even on a power play when Wheeler was hampered for much of the time with a broken stick.

San Jose had a 28-9 edge in shots in the second but could only manage one goal early in the period when Goodrow completed a quick transition play started by Marc-Edouard Vlasic by scoring his fourth goal of the season.

The Jets opened the scoring in the first following a turnover near the boards by Brent Burns. Kyle Connor got the puck to Bourque in the slot, who beat Jones for his first goal of the season.