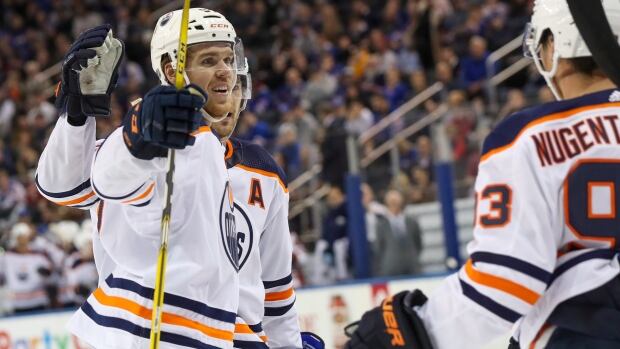 Connor McDavid and the Edmonton Oilers aren’t satisfied with their strong start. They know they can improve.

McDavid scored the tiebreaking goal and Leon Draisaitl had two goals and an assist, all in the third period, and the Edmonton Oilers beat the New York Rangers 4-1 Saturday for their season-opening fifth straight win.

“It’s nice to be 5-0 but we have to keep getting better,” said McDavid, who also had an assist. “I thought we were really effective as a line tonight. There’s a few times we tried to force plays, turned the puck over a little bit in the first (period).”

Oscar Klefbom had a goal and an assist, and Mike Smith stopped 20 shots to help Edmonton improve to 5-0-0 for the first time in 34 years and become the first NHL team to win its first five games after trailing in each.

“We got scored on early tonight and a lot of time in the game left to come back,” Oilers coach Dave Tippett said. “We don’t think about that, we think about playing well. First period was all right, but I thought we got a lot better as the game went on. … We just went about our business and found a way to win.”

Edmonton completed a sweep of the New York area teams. The Oilers beat the Islanders 4-1 on Tuesday night, and then edged New Jersey 4-3 in a shootout Thursday night.

Rookie Kaapo Kakko had his first NHL goal for the Rangers, who had won their first two games but were playing for the first time in a week. Henrik Lundqvist finished with 23 saves.

“As the game went on we just got sloppier and sloppier,” Rangers coach David Quinn said. “We played with the wrong pace. … At the end of the day, we weren’t good all the way up and through lineup.”

With the score 1-1, Edmonton took the lead when McDavid was credited with a power-play goal at 9:44 of the third period. His pass for Neal in front deflected off Rangers defenceman Jacob Trouba’s leg and past Lundqvist. It was McDavid’s fourth of the season.

Draisaitl made it 3-1, knocking in a loose puck in front of Lundqvist with 6:42 left. Lundqvist appeared to believe he had smothered the puck, but officials didn’t blow a whistle. Draisaitl kept whacking at the puck.

The Rangers pulled Lundqvist for an extra skater, but Draisaitl got an empty-netter, his fourth goal of the season, with 15 seconds left to seal the win.

“I don’t think we were at our best, halfway through the second maybe,” Smith said. “The third period was our best period. We just kind of stuck with an ugly game for the first two periods. … We’re finding ways to get it done and that’s what it’s about really.”