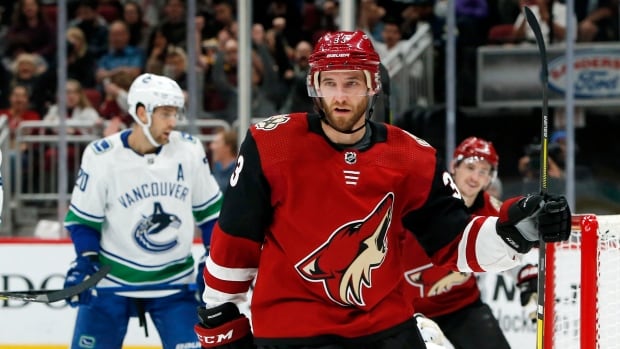 Keller took advantage of a turnover in Vancouver’s zone to make it 2-1 3:55 into the third, and Richardson scored short-handed about eight minutes later. Lawson Crouse added an empty-net goal.

Arizona ended a two-game home skid and has won three of four overall.

Alex Goligoski scored in the second period for the first goal by a Coyotes defenceman this season. It was also Arizona’s first goal on home ice.

The injury-riddled Canucks were without several key players, including three who got hurt in a win Wednesday night at Vegas. The Pacific Division leaders played their first back-to-back set this season.

Darcy Kuemper stopped 27 shots in place of Arizona starter Antti Raanta, who sat out a second straight game due to illness.

Anders Nilsson had 26 saves for the Canucks, and Darren Archibald scored.

Vancouver had two good chances to score in the first period, but Loui Eriksson’s shot from in close was stopped by Kuemper, and Derrick Pouliot hit a post with a power-play shot.

Goligoski flipped a backhand out of Nilsson’s reach 43 seconds into the second. The Canucks responded at 2:23 when Archibald redirected Troy Stecher’s long shot off a faceoff.

Crouse and Canucks forward Antoine Roussel came to blows in the second period and were both penalized for roughing. Crouse and Roussel were also involved in a scuffle at center ice late in the period after Roussel pulled Keller down from behind.

Both Roussel and Crouse, who came to Keller’s defence, were given 10-minute misconduct penalties.