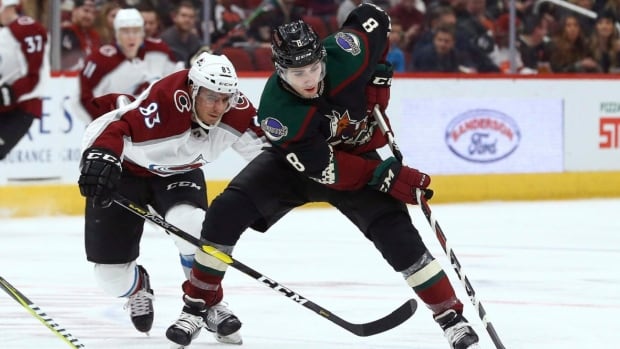 The Arizona Coyotes have signed center Nick Schmaltz to a seven-year contract extension, the team announced on Saturday.

Schmaltz, 23, has been sidelined since the beginning of the year with a lower-body injury that ended his season.

Terms of the deal were not disclosed, but The Athletic’s Craig Morgan reported it will pay him an average of $5.85 million US per season.

“Getting Nick signed to a long-term extension is another positive step towards building a sustainable contender here in the Valley. Ownership continues to commit the resources necessary to solidify our core group of players for years to come.”

“I’m very excited to sign a long-term contract with the Coyotes,” said Schmaltz, per the team’s statement. “We have a great core of young, talented players in Arizona and I’m looking forward to coming back healthy next season and contributing for many years to come. We have a very bright future here and I’m thrilled to be a part of it.”

Schmaltz had five goals and nine assists in 17 games with the team since being acquired from the Chicago Blackhawks on Nov. 25 in exchange for Dylan Strome and Brendan Perlini. Overall, he had seven goals and 18 assists in 40 games this season.