Craig Anderson made 46 saves as the Ottawa Senators held on to beat the Buffalo Sabres 4-2 on Thursday in the first meeting of a home-and-home series.

Ryan Dzingel, Dylan DeMelo, Colin White and Bobby Ryan, into an empty net, scored for the Senators (5-5-2), who got two assists apiece from Thomas Chabot and Mark Stone.

Jason Pominville and Jeff Skinner had the goals for the Sabres (6-5-2) while Carter Hutton made 28 saves.

The Senators had built themselves a 3-0 lead heading into the third period thanks in part to two power-play goals. But two goals, including one on the power play, from the Sabres in the opening four minutes in the third made it tight until the end.

Pominville scored just 59 seconds in when he tipped a point shot from Jack Eichel past Anderson. Skinner then scored on the power play at 3:55 on a near identical goal as he tipped Rasmus Ristolainen’s point shot past the Senators goalie.

Dzingel opened the scoring at 6:55 of the first with Ottawa’s first extra-strength goal. He got the puck alone at the side of the net and was stopped by Hutton but then jammed his own rebound under the Sabres netminder. 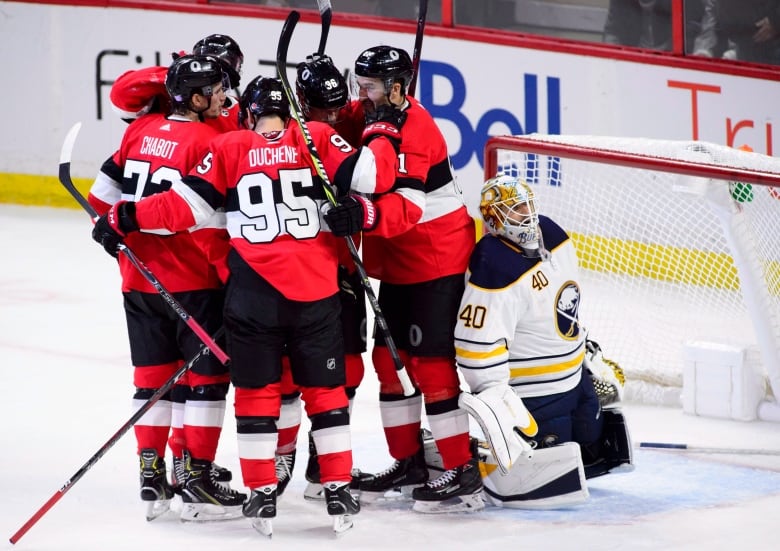 Buffalo Sabres goaltender Carter Hutton (40) kneels on the ice as the Ottawa Senators celebrate a goal by Colin White during the second period on Thursday night. (Sean Kilpatrick/The Canadian Press)

Buffalo came close to tying the game late in the period but the point shot from Ristolainen struck iron behind Anderson.

The Senators had 10 of the first 11 shots in the first but the Sabres then responded with the next 11-of-13 as the teams finished the first with 12 shots apiece.

In the second DeMelo gave the Senators a 2-0 lead as his point shot hit the end boards before bouncing off Hutton’s back and in 60 seconds into the period.

White then gave the Senators a 3-0 lead with a power-play goal at 14:47 as he had an empty net to shoot out from the slot after Hutton was knocked down in the crease after being bumped by Ristolainen.