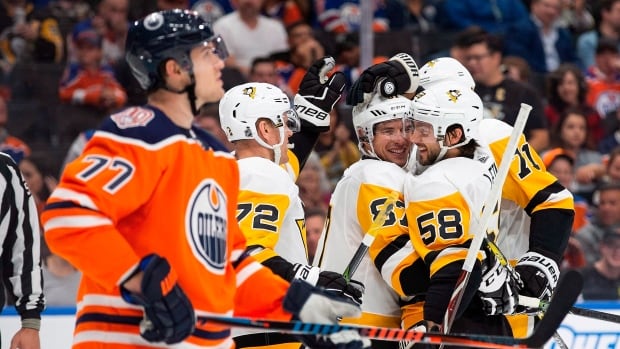 Sidney Crosby scored his first two goals of the season, including a dazzling overtime winner, as the Pittsburgh Penguins emerged with a 6-5 victory over the Edmonton Oilers on Tuesday.

Jamie Oleksiak and Patric Hornqvist also had two-goal games for the Penguins (4-1-2), who have won two straight.

Leon Draisaitl and Alex Chiasson each scored twice, while Connor McDavid had the other for the Oilers (3-3-1), who have lost two in a row.

Matt Murray backstopped the Penguins to victory with 41 saves, while his counterpart Cam Talbot kicked out 25 shots in the loss.

The Penguins started the scoring 11 minutes into the first period on the power play as Crosby tipped home a Kris Letang shot that was going wide past Talbot. It was Crosby’s first goal in seven games, the longest he had gone without a goal to start the season in his 14-year career.

Edmonton tied the game just over a minute into the second period, when Draisaitl picked up a loose puck in the slot and beat Murray with a wrist shot.

The Oilers went up 2-1 a couple of minutes later, when Chiasson laid a big hit in the corner and then got the puck back in front and scored while falling to the ice. It was his first goal of the season in his second game as an Oiler.

Pittsburgh knotted the game back up seven minutes into the middle frame, when a nice three-way passing play was chipped in by a pinching Oleksiak.

The Penguins regained the lead midway through the second when a give-away led to a goal by Hornqvist.

The see-saw second continued with Edmonton pulling even when Chiasson scored his second of the game on a two-on-one with five minutes left.

Crosby scores his first goal of the season:

Pittsburgh captain’s nice deflection puts his team up 1-0 over Edmonton. 0:31

The Penguins made it 4-3 in the final minute when a puck went in off of Hornqvist’s skate for his second of the game.

Edmonton took the lead again early in the third on a pair of power plays as McDavid snuck a shot past Murray and then set up Draisaitl for his second of the night shortly after.

Pittsburgh tied it up once again seven minutes into the third on a slap shot by Oleksiak.

Both teams return to action on Thursday, with the Penguins continuing a Western Canadian road swing in Calgary and the Oilers closing out a four-game homestand against the Washington Capitals.