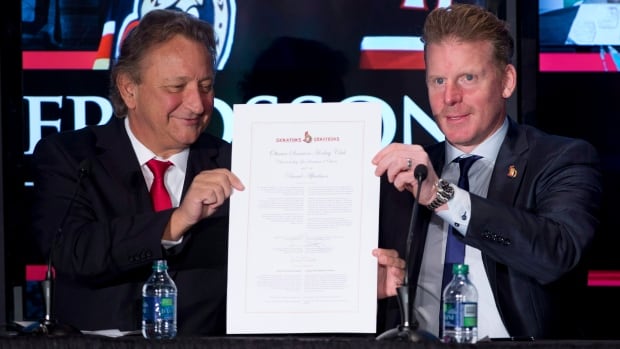 Daniel Alfredsson, who captained the Ottawa Senators for 13 of his 17 seasons with the team, has reportedly spoken with Ottawa mayor Jim Watson about the hope for new ownership for the team instead of Eugene Melnyk.

“We’ve talked a lot, we’ve talked about the future of the Senators and of its ownership and we agree,” Alfredsson told former Ottawa Sun columnist Susan Sherring on Sunday, while appearing in support of Watson as the mayor kicked off his campaign for a third term. “We hope we get a new owner.”

According to Sherring, Alfredsson later told Sherring his comments were off the record, but she published them in her blog — On the City, From the Burbs — while noting that no such agreement had been made before the interview.

Melnyk, who turned 59 on Sunday, bought the team in 2003, when Alfredsson was seven seasons into his 18-year NHL career. The owner has been involved in several contentious situations between players and fans over the years since, including the contract dispute that led to Alfredsson leaving Ottawa in 2013 to play the final year of his career with the Detroit Red Wings.

After retiring, Alfredsson returned to the team to join the front office in 2015 as a senior adviser of hockey operations, but stepped away from the organization abruptly last July, without providing any details as to why.

In December, Melnyk told reporters that he would consider moving the franchise — whose ticket sales lagged in the middle of a 67-point season — elsewhere “if it becomes a disaster,” adding that he would not “blow a lifetime of working hard to support a hockey team.” He also said, as he has many times, that he has no intention of selling the team.

Many Senators fans showed disdain for Melnyk late in the season, bringing anti-Melnyk signs to games and buying billboards across the city bearing the hashtag #MelnykOut.

Karlsson future ‘not all in his hands’

The fire has been fueled by speculation that star defenceman Erik Karlsson, who has spent all nine of his NHL seasons with the Senators and captained the team for the last four, could be on his way out. The team has expressed a desire to re-sign the four-time All-Star and two-time Norris Trophy winner, but it has also said it will listen to trade offers for him.

“To me, he says that he wants to stay,” Alfredsson told reporters of Karlson when asked earlier this month at the International Ice Hockey Federation Hall of Fame induction in Copenhagen. “But it’s not all in his hands.”

Alfredsson, 45, is the all-time leader in almost every meaningful statistic in Senators history, though he ranks second in games played, one behind longtime teammate Chris Phillips.

Karlsson, who turns 28 on Thursday, ranks third in franchise history in both assists (392) and points (518), while ranking ninth in goals scored (126).