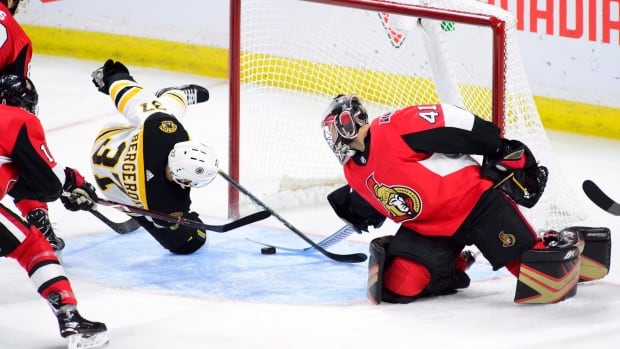 David Pastrnak had two goals and two assists to lead the Boston Bruins to a 4-1 win over the Ottawa Senators on Tuesday night at Canadian Tire Centre.

With the win, the Bruins (5-2-2) snapped a three-game losing streak and beat the Senators for the second time this season.

Patrice Bergeron chipped in with a goal and two assists, while David Krejci scored his second of the season. Tuukka Rask made 38 saves.

Thomas Chabot scored the lone goal for the Senators (4-3-1), who saw their three-game winning streak come to an end to wrap up a season high five-game homestand with a 3-2-0 record as they depart for a three-game road trip Thursday.

Boston made it 3-1 just 21 seconds into the third on the power play as Bergeron tipped Pastrnak’s shot, and then put the game out of reach as Brad Marchand dangled his way around Dylan DeMelo and found Pastrnak alone at the side for his second of the night.

Trailing 1-0, the Senators tied the game late in the second as Chabot scored a power-play goal from just inside the blueline, but the Bruins quickly regained the lead.

Already shorthanded, the Senators were called for too many men giving the Bruins a two-man advantage and they scored on their first shot as Krejci beat a sprawled Anderson.

The Bruins opened the scoring in the first period as Danton Heinen was able to hold the puck in at the Ottawa blueline and feed Pastrnak, who wristed a shot past Anderson for his ninth of the season.

Bobby Ryan looked poised to get the Senators on the board early in the period on the power play, but just as the puck was about to cross the goal line Brandon Carlo swept it away.