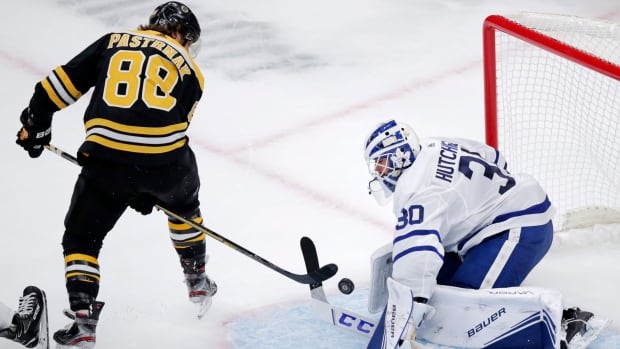 David Pastrnak scored his league-leading 10th goal and added an assist as the Boston Bruins beat the Toronto Maple Leafs 4-2 on Tuesday night.

Brad Marchand also had a goal and an assist, and Brett Ritchie and Par Lindholm also scored for Boston, which was playing for the first time since a 4-3 loss in overtime at Toronto on Saturday night. Tuukka Rask made 28 saves in his 500th career game.

Kasperi Kapanen and Alexander Kerfoot had a goal and assist apiece for the Maple Leafs, who were coming off an overtime loss to Columbus at home on Monday night. Michael Hutchinson stopped 35 shots.

The Maple Leafs tied after falling behind 1-0 and 2-1, but couldn’t get anything past Rask in the third period.

Ritchie’s unassisted goal 6:35 into the third put Boston back up 3-2 and Lindholm got his first of the season when he poked in a rebound with 2:03 left in the game.

Pastrnak appeared to score on a rebound at 10:48 in the first, but the goal was waved off after Toronto challenged and replay showed the play was offside.

After having a goal disallowed earlier in the game, David Pastrnak makes no mistake on this one and lets the refs know about it 🍝 <a href=”https://t.co/faKJtFLvl0″>pic.twitter.com/faKJtFLvl0</a>

Pastrnak scored one that counted later in the period when he slipped the puck between his own legs, then redirected it past Hutchinson with 2:45 left in the first and the Bruins led 1-0 after one. The goal gave Pastrnak 300 career points.

Kapanen tied it on a one-timer off a crossing pass from Kerfoot with just under 4 1/2 minutes into the middle period. Marchand’s goal put Boston up 2-1 at 6:09, as Pastrnak got another point with an assist.