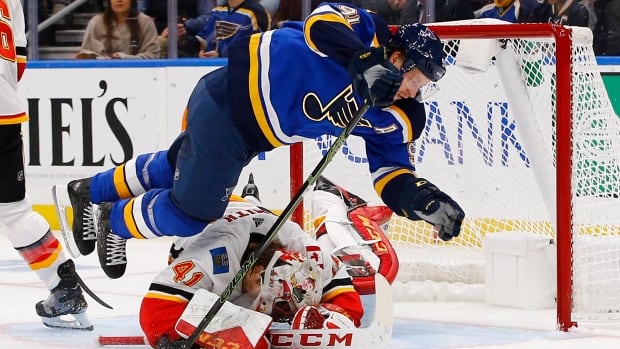 David Perron scored his fourth career hat trick, Alexander Steen had a goal and an assist, and the St. Louis Blues beat the Calgary Flames 5-3 on Thursday night.

Joel Edmundson also scored and Brayden Schenn had three assists as the Blues won for the first time this season. Jake Allen made 31 saves.

Perron gave the Blues a 2-1 lead midway through the first period. Edmundson, making his season debut after missing the first two games with a sore groin, made it 3-1 Blues with 2:38 left in the first, beating Smith high glove side.

Perron’s second goal early in the second made it 4-1. Smith misplayed the puck behind the net, allowing Schenn to steal it and find Perron alone in front with an empty net.

Perron completed the hat trick with 35 seconds left in the second. His last hat trick also came at Calgary’s expense on Oct. 22, 2016.

Neal gave the Flames a 1-0 lead at 7:32 of the first. Sam Bennett set it up with a nice move in front, causing Allen to commit and leaving an opening for Neal.

Allen got help from his post on Sean Monahan’s penalty shot late in the first period. He also made several tough saves as the Blues killed off a 5-on-3 for 1:35 late in the second period.

Ryan and Backlund scored in the third for Calgary to cut the deficit to two.