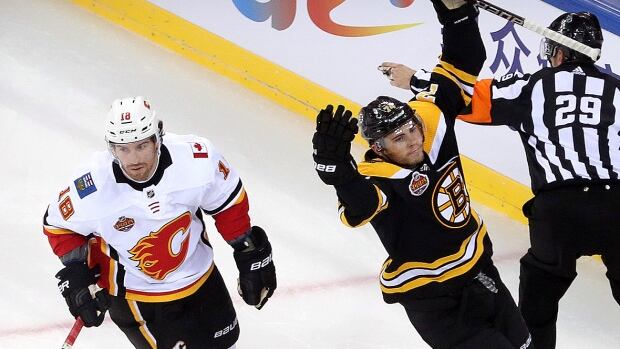 Jake DeBrusk scored two goals, including the game-winner in the third period, to lead the Boston Bruins to a 3-1 win over the Calgary Flames on Wednesday in Beijing.

Boston swept the O.R.G. NHL China Games. The Bruins won the exhibition season opener 4-3 in a shootout on Saturday in Shenzhen, China.

DeBrusk opened the scoring with 1:51 left in the first. Calgary’s Sean Monahan tied the game with a goal after he exited the penalty box with 2.8 seconds left in the second period.

Tuukka Rask played the entire game in goal and made 22 saves for Boston, which is 5-0-0 in the pre-season.

Mike Smith made 16 saves for Calgary.

Rob Pizzo examines each Canadian NHL team in video below: