They flew in to Winnipeg last year before driving together to Kenora, Ont., for a Hockey Day in Canada event.

“It was maybe the most entertaining two-hour drive I’ve ever had,” Moore recalled Tuesday. “We did everything from talking about old movies to him singing his favourite rap songs to me. It was unbelievable.

“If people knew the Don Cherry behind Coach’s Corner, they’d have an even greater appreciation for what an incredible guy he is.”

They’re planning to get together again this summer to talk about Cherry’s future plans. Cherry, still going strong at 84, last had his contract extended in 2016.

“I think he continues to be relevant, he continues to be must-watch television,” Moore said in an interview at a downtown restaurant. “We sit down every July for lunch to talk about whether or not he wants to come back and in what capacity.

“I expect that he will be back next year. We’ve had some preliminary discussions. I’m obviously a big fan of his.”

Longtime host Ron MacLean, 58, remains under contract for next season.

Moore said the door is open for the part-time return of longtime play-by-play man Bob Cole. The 84-year-old has had a reduced schedule in recent years and did not work any post-season games this spring.

Like Cherry, Cole is at the stage of his career where he sorts out his work setup on an annual basis in the off-season. 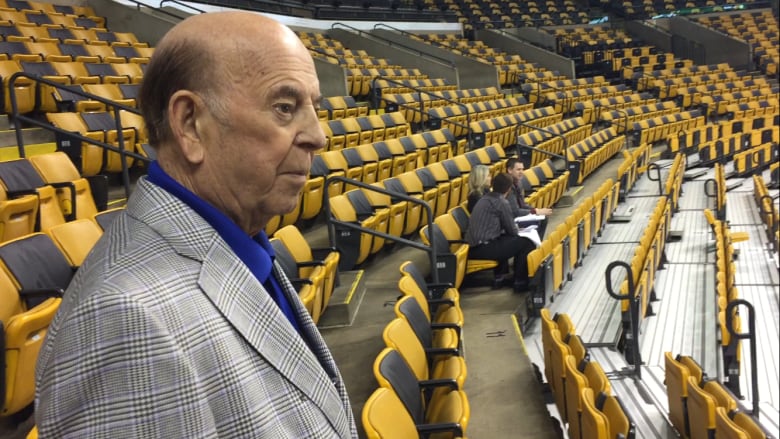 Bob Cole was left off Sportsnet’s playoff broadcast roster this spring, but president Scott Moore said the door is open for the 84-year-old to return in a part-time role next season. (Jamie Long/CBC)

“Bob and I have talked about whether or not he would do some games next year,” Moore said. “We will discuss that over the summer. I continue to be a big fan of Bob’s. He is a legend.

“We’d love to have him do a few games next year.”

Jim Hughson has served as one of the network’s top play-by-play announcers in recent seasons. He’s calling this year’s Stanley Cup final between the Washington Capitals and Vegas Golden Knights with analyst Craig Simpson.

Sportsnet is part of Rogers Media, a subsidiary of Rogers Communications, which is in its fourth year of a 12-year, $5.2-billion deal with the NHL. The agreement included a sub-licensing deal to allow the CBC to air “Hockey Night in Canada.”

It has given hockey fans their fix of Bob, Ron and Don.

“All three of those guys engage with the fans personally in a way that Hollywood celebrities don’t,” Moore said. “Fans feel personally attached to their sports media heroes and that’s a good thing. That’s a great thing for us. But it’s a double-edged sword because at some point there’s turnover.”

Planning for that eventual turnover can be a big challenge for network brass, especially when beloved personalities are in the twilight of their careers.

Moore said the most important things are to be respectful of the audience and the individual.

“That’s not an easy task because in many cases, people who have been involved in hockey and involved in sports media, it’s not just a job, it’s a passion,” Moore said. “So discussing when that passion is over is a difficult discussion in any case.

The CBC signed an extension last December that allows the public broadcaster to carry HNIC until the end of the Rogers deal.

Hockey fans have not been shy about voicing their displeasure at any tweak or change on the broadcasting front. So whether he’s planning to keep things status quo or make changes, Moore can always count on a full inbox and regular comments on his social media feeds.

“You’re always open to criticism no matter what you do,” Moore said. “But it’s still the most-watched sports program week in, week out. During the playoffs, you’re No. 1 every night in the ratings.

“That’s a responsibility but it’s also a great success story.”

Moore also said there have been talks to bring Brian Burke back next season. He joined the network as a commentator/analyst for the playoffs after his departure from the Calgary Flames’ front office.

“We haven’t come up with exactly what his role will be,” Moore said. “But he will be in some way, shape or form on Saturday nights and probably on Wednesday nights. Because we have so many hockey properties, including our radio shows, I would expect you’d see a lot of him.”

Sportsnet also announced Tuesday that it will team up with Twitter for a full season of “Sportsnet Ice Surfing.”

The weekly show, which will stream on the social platform, was unveiled as part of the annual Rogers Media Upfront presentation.