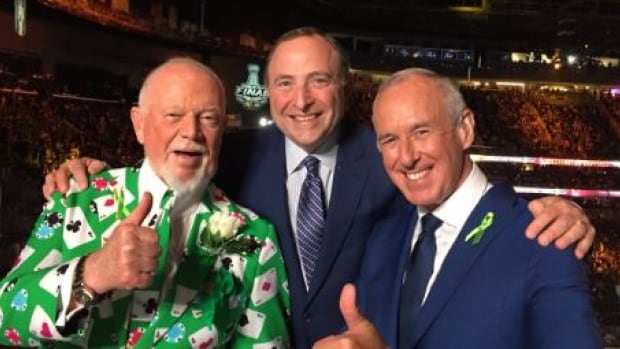 Don Cherry put NHL commissioner Gary Bettman on the spot about expanding the league back into Quebec City.

Cherry and co-host Ron McLean were speaking during their Coach’s Corner segment on Wednesday night during the first intermission of Game 2 of the Stanley Cup final between the Washington Capitals and the expansion Vegas Golden Knights. Bettman was standing nearby and the Hockey Night in Canada commentators invited him to step in front of the camera.

“Gary, what I have to say to you here is: Quebec is unbelievable to me,” said Cherry. “There’s never been a rivalry in hockey or any sport like Quebec and Montreal. I think they’ve been very good, they’ve been keeping their mouths shut. They have not been saying a word.”

The Quebec Nordiques entered the NHL in 1979 as part of the World Hockey Association’s merger with the league. After struggling through their first season in the NHL, the Nordiques improved and began a fierce rivalry with the Montreal Canadiens. In 1995 the team relocated to Denver and became the Colorado Avalanche.

In 2015 a bid was made for Quebec City to earn a new expansion team. Buoyed by the completion of the Videotron Centre that year, the Quebec City bid was deferred until a later date. The 18,259-seat arena has hosted several pre-season NHL games.

“They had 18,000 people in there, they have a brand-new building, they’re ready to go, I think it’s fantastic,” said Cherry before McLean coaxed Bettman in front of the camera. “What do you say? I think they deserve it. They really do.”

“A lot of issues, logistical and otherwise,” said Bettman in response to McLean. “Mr. Jacobs expressed an opinion of some skepticism, but we’re not in a process right now and he has one vote.”

Cherry re-stated his case for a return to Quebec City in reply before Bettman leaned over to McLean and said “I think [Cherry] his popularity just went up in Quebec.”