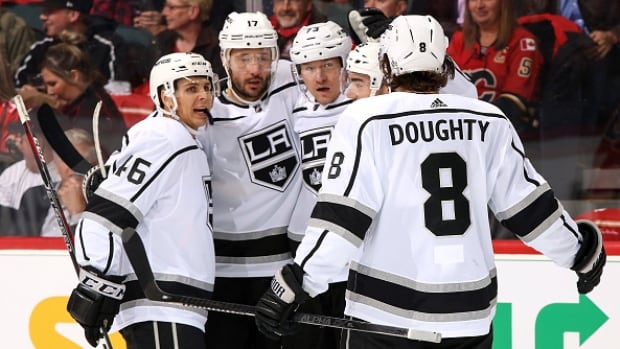 Drew Doughty scored the overtime winner for the Los Angeles Kings in a 4-3 win over the Calgary Flames on Tuesday.

The Kings collected their first win of the season after falling 6-5 in their season-opener to the host Edmonton Oilers on Saturday.

Tyler Toffoli had a goal and an assist, with Sean Walker and Ilya Kovalchuk also scoring for Los Angeles (1-1-0). Jack Campbell posted 26 saves for the win.

Matthew Tkachuk countered with two goals and an assist, and Noah Hanifin also scored for Calgary (1-1-1). David Rittich turned away 25 shots in the loss.

With Rittich pulled for an extra attacker, Tkachuk’s second goal of the game pulled the Flames even with 64 seconds remaining.

The winger tipped the puck in the air on a rebound and batted it by Campbell.

The Kings took a man advantage into overtime with Calgary’s Sam Bennett serving a tripping minor.

Calgary trailed 3-0 midway through the second period when Tkachuk and Backlund scored within a three-minute span.

Campbell squeezed his pads too late on a Hanifin backhand at 13:33 to pull the hosts within a goal.

Tkachuk scored off a broken play in the offensive zone beating Campbell low stick side at 10:51 of the second period.

Kovalchuk batted a rebound in the air by Rittich at 3:46 of the second period. The Kings’ third goal was allowed to stand upon review.

The flat-footed Flames were outshot 20-3 in the opening period and failed to register a shot on net during a first-period power play.

Walker’s sharp-angled wrister from the boards fooled Rittich at 17:26.

A scramble for a rebound from a Doughty shot squirted out to Toffoli, who beat Rittich glove side at 2:53.

Friction between Doughty and Tkachuk

The friction between Doughty and Tkachuk dating back to the latter elbowing the former in the face during Tkachuk’s rookie season surfaced by the first period when Tkachuk laid a couple checks on Doughty.

Doughty had said the previous day “I think we both know who the better player is.”

The Saddledome booed Doughty whenever he had the puck.

The Flames gave their fans little to cheer about for half a game until Tkachuk’s goal sparked the home club.