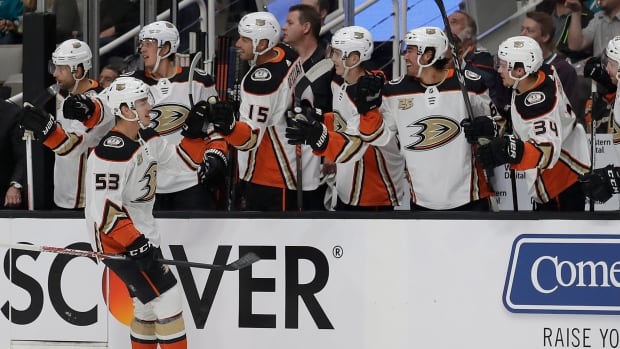 John Gibson made 31 saves, Brandon Montour scored the tiebreaking goal with 11:58 to play and the Anaheim Ducks spoiled Erik Karlsson’s San Jose debut with a 5-2 victory over the Sharks in the season-opener Wednesday night.

Rickard Rakell added a goal and two assists, Max Comtois scored on his opening shift in the NHL and Adam Henrique also had a goal in the first game for the Ducks since getting swept in the first round by San Jose last spring. Jakob Silfverberg had three assists and Carter Rowney scored an empty-net goal for Anaheim.

Evander Kane and Tomas Hertl scored for the Sharks but Martin Jones allowed four goals on the first 13 shots he faced to take the loss. Jones finished with 10 saves.

While Jones was barely tested, Gibson was kept busy all night and helped keep the Ducks in the game until Montour and Henrique scored in a span of 2:20 to break a 2-all tie. Gibson stopped Kane on a breakaway early in the third to maintain the tie.

Montour scored the go-ahead goal when he beat Jones with a backhand from the circle in transition to the short side to dampen the mood at the Shark Tank on a night the fans welcomed the two-time Norris Trophy-winning Karlsson to the team in his first game since being acquired from Ottawa last month.

While the Sharks fans were excited to see Karlsson, it was the Ducks who struck first. Comtois scored 49 seconds into the game and 4 seconds after stepping on to the ice for the first time as an NHL player. Silfverberg got him the puck after a neutral zone turnover by Brent Burns and Comtois beat Jones for the sixth fastest goal by a player making his NHL debut.

The Sharks then took the lead with a pair of spectacular goals from Kane and Hertl. Kane struck in the first period when he brought the puck into the offensive zone against three defenders, deked Josh Manson and beat Gibson for the equalizer.

Hertl topped that late in the second period with the Sharks short-handed. He stole the puck in his own zone and carried it up ice. Hertl then played the puck between Cam Fowler’s legs before beating Gibson for his second career short-handed goal.

The Ducks tied it 46 seconds later on the same power play when Silfverberg slid a pass through the crease to Rakell, who knocked it into the open net.