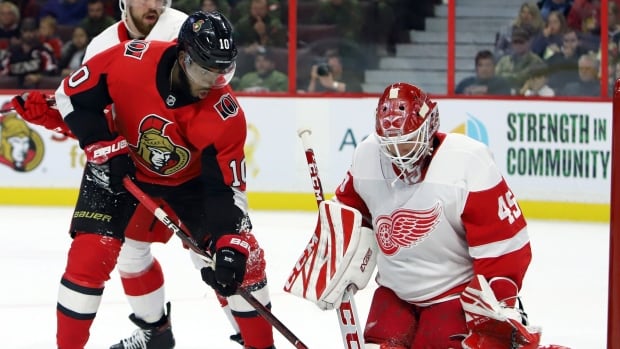 Chris Tierney, Mark Borowiecki and Jean-Gabriel Pageau also scored for the Senators (2-6-1.) Anders Nilsson made 34 saves for his first win of the season.

The Senators led 4-2 to start the third and while the Red Wings had a few good chances, Nilsson was solid making a number of big saves.

Duclair scored his second, an empty-net goal, with just under two minutes remaining in regulation.

Trailing 1-0 to start the second period, the Red Wings took their first lead of the game by scoring twice in less than two minutes.

WATCH | Emerging storylines in the early days of the NHL season:

Justin Abdelkader found Helm in the circle and wristed a shot past Nilsson to get Detroit on the board. Shortly after, Bertuzzi was able to jump on a rebound and went top shelf to go ahead 2-1.

The lead was shortlived as Borowiecki took a pass from Nick Paul and wristed it over Bernier’s shoulder for his first goal of the season.

Ottawa regained the lead as Pageau, with his team-leading third goal, scored shorthanded to make it 3-2.

The Senators scored late in the period as Thomas Chabot made a great cross-ice pass to Duclair all alone in close.

A solid first period saw the Senators take a 1-0 lead on Tierney’s third of the season. Bobby Ryan fanned on a backhand and Tierney jumped on the loose puck.

Logan Brown made his season debut after being recalled from the AHL’s Belleville Senators.

Brown was given a great opportunity to showcase himself as he centered Brady Tkachuk and Anthony Duclair on the top line.