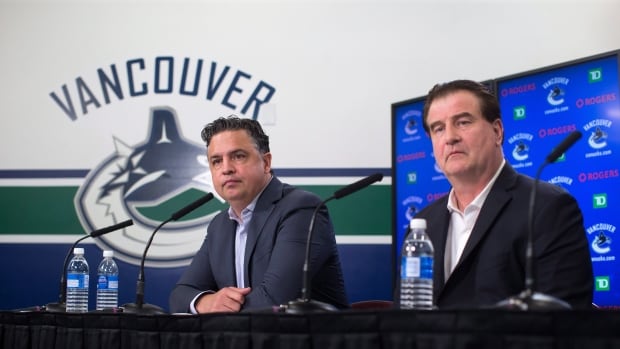 The head coach of the Vancouver Canucks has a simple message for his players.

“Everyone should feel pressure,” Travis Green said Thursday as players reported for medicals and physical testing. “Our team got 73 points last year. There’s pressure to get better for everyone.”

Vancouver finished last season second-last in the Pacific Division with a 31-40-11 record, and has lost stalwarts Daniel and Henrik Sedin, who retired after 17 seasons in Canucks jerseys.

The disappointing finish and the loss of the twins means there are jobs up for grabs as the squad heads to Whistler, B.C., for training camp this weekend.

Green said he has lots of options to fill the roster, between returning veterans and up-and-coming youngsters like Swedes Elias Pettersson and Jonathan Dahlen.

“I think we have a team right now that, well, there’s a lot to be determined,” the coach said. “You look at our forward group and, man, there’s a lot of guys vying for jobs. I’m not going to pencil in guys to play in a certain spot yet. I want to see where everyone’s at.”

Returning players not a lock

Returning players who fail to meet expectations could be sent down on waivers, said Canucks general manager Jim Benning.

“That’s what training camp is going to be for. We have extra players. The players know that. And it’s going to be how they show at camp,” he said.

Young players who’ve been battling for a roster spot need to take the next step, whether that’s offensively or otherwise, Benning said, adding that he’s spoken to many who seem to have put in a lot of hard work over the summer.

“They know what’s at stake. And I’m expecting them to come in and be better this year,” he said.

One Canuck who isn’t looking to make any big changes this season is right winger Brock Boeser.

The 21-year-old played 62 games for Vancouver before a broken back cut his first NHL season short. He still managed to put up 29 goals and 26 assists, and was a finalist for the league’s rookie of the year award.

“I think I don’t need to change my game at all,” Boeser said. “I think if I play the way I did last year, come to the rink every day with that same mindset, take it day by day, work hard and with these guys by my side, I think I can have the same season I did last year and hopefully build off of that.”

Still, Green wants to see his team produce more offence, especially with the Sedins out of the lineup. Combined, the twins tallied 105 points last year.

Their impact wasn’t only on the score sheet, but in the locker room, too, said centre Bo Horvat.

“It’s tough to lose Hank and Danny because they were such keys to our group, but at the same time … there’s a lot of young kids that are going to come up, that are going to step in and try to prove themselves as every-day NHLers,” he said.

Horvat is one of the players expected to take on a larger role this season. Last season, he played 64 games, notching 22 goals and 22 assists. Horvat things he can increase that point total.

“We want to keep getting better every year,” said the 23-year-old. “Scoring more goals and getting points is going to win us hockey games. That’s the most important part.”

‘It’s hard to score in this league’

Putting the puck in the back of the net has been a source of angst for the Canucks in recent years. The team scored 218 goals last season and was 26th in the league in that department.

“It’s hard to score in this league,” he said. “There’s good goalies, there’s good teams and we’ve got to find a way to do it if we want to have success.”

While the Canucks have a promising group of young players, including Boeser and Pettersson, everyone will need to chip in when it comes to putting up points, the coach said.

“We’re going to have to do it by committee,” Green said. “I’m expecting a lot of our players to be better hockey players than they were last year. We’re going to need that.”