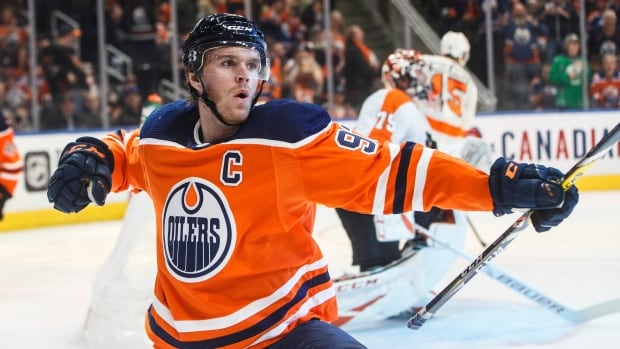 Edmonton’s downtown arena could be home to a special brand of playoff hockey this summer— a Stanley Cup run that would see players quarantined and the stands remain empty.

With Edmonton expected to be named as a hub city for the National Hockey League’s resumption of play, hockey fans in the capital city are buzzing with anticipation about what might lie ahead.

Vancouver, Chicago, Columbus, Dallas, Las Vegas, Los Angeles, Pittsburgh, and Minneapolis have also been vying for the chance to host.

A formal announcement has not been made — and CBC has not independently confirmed the reports —  but TSN and Sportsnet are both reporting the news. Officials with the Edmonton Oilers declined to comment on Wednesday.

“I’ve been championing this from the beginning,” Jones said in an interview Wednesday.

“Edmonton is the only city involved that checks all the boxes. It has more and better dressing rooms, it has enclosed practice rinks. It has an arena with a five-star hotel across the road that can hold all the teams for the first round, with a pedway.

“The players could be in the bubble all the time.”

Edmonton wasn’t initially a front runner in the bid, Jones said, but a sudden escalation of COVID-19 cases in the United States has made Canadian markets more attractive.

“When they allowed the casinos to open again, [COVID-19] just went skyrocketing again, along with so many of the other American places. There were so many positive tests with hotel personnel, Las Vegas just played itself right out of the game.

“In the United States, there was nowhere safe left to go and there were just two Canadian cities left standing.”

In the United States, there was nowhere safe left to go and there were just two Canadian cities left standing.-Terry Jones

Jones said questions remain about how the NHL will handle possible outbreaks among its players during the playoffs. Any plan would need to be fully ratified by players, Jones said.

“The players clearly want to play but there is lots of stuff that still needs to be done,” he said.

Mayor Don Iveson was not available for an interview on Wednesday but earlier this week said Edmonton would be well-suited to host. The number of COVID-19 cases in the city has remained relatively low, unlike some potential markets in the United States, he said.

“It’s an exciting prospect but it’s hard to comment on speculation or rumour at this point,” Iveson said during a Tuesday news conference at city hall.

“We’re not often united between Toronto and Edmonton, but if we’re all being good Canadians, it would be a great Canada Day reward to this country and to these cities for the work that our citizens have done to keep counts low.”

The Public Health Agency of Canada and public health authorities in Toronto and Edmonton have given their approval of the NHL’s plan to keep players separate from the general public.

Called a cohort quarantine, it would allow players to bypass the traditional 14-day self-isolation for anyone entering Canada.

The NHL plans to start training camps for the 24 playoff teams on July 10 and hopes to resume play later in the summer.

Games would be played before empty arenas and players would be kept separate from the public.

In a statement to CBC News, Alberta Health Services said it is prepared for the possibility of playoff hockey. Health protocols were developed earlier this spring by Chief Medical Officer of Health Dr. Deena Hinshaw.

“In May, Dr. Hinshaw announced that Alberta Health had developed guidelines for professional sporting tournaments that would allow Edmonton to be considered for a hub city for the NHL playoffs while still protecting Albertans,” the statement said.

“These guidelines were developed to support players, NHL staff, media personnel and Albertans to stay healthy and safe during such an event.

“If Edmonton is chosen, health officials will work with all applicable partners to ensure the guidance is followed to the letter and to protect the public.”