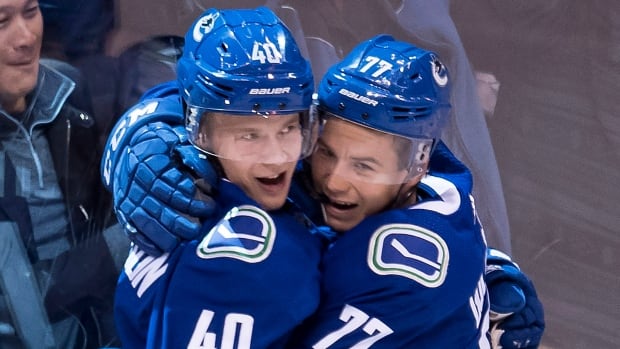 Rookie Elias Pettersson buried his first shot in his first NHL game Wednesday, leading the Vancouver Canucks to a 5-2 win over the Calgary Flames.

Matthew Tkachuk and Sean Monahan responded for the Flames.

Pettersson opened the scoring in the 14th minute, notching his first NHL goal in a regular-season game. He later picked up an assist.

The 19-year-old Swede collected the puck in the neutral zone, then sprinted into Calgary’s end with teammate Derrick Pouliot for a two-on-one. Pettersson opted not to pass, instead rocketing a wrist shot into the top of the net.

The goal brought chants of “Petter-sson” from the crowd.

After a scoreless second, the final frame started with a flurry of goals.

Pettersson got the puck in front of the net and passed it off to Goldobin, who tipped it in at the side to start the action.

Thirty seconds later, Leipsic snuck a puck into the same spot to put the Canucks up 3-0.

But the Flames weren’t about to call it a game.

Less than a minute after Leipsic’s goal, Calgary’s Tkachuk caught Markstrom too far out of the net and buried the puck to put his team on the board. Centreman Austin Czarnik and defenceman Noah Hanifin got the assists. The helper was Hanifin’s first point as a Flame after being acquired from the Carolina Hurricanes during the summer.

Virtanen responded by getting a breakaway and sliding the puck in past Smith as he fell to the ice.

The fifth goal of the period came from Sean Monahan, who ended a battle outside the Vancouver crease with a wrist shot. The shot slipped through Markstrom’s legs and into the net. Wingers Johnny Gaudreau and James Neal were credited with the assists.

Vancouver’s Motte got a pass from Markus Granlund and put a long shot into the empty net with 47 seconds to go in the game.

The Canucks penalty killing unit was forced to put in work against the Flames, with Calgary getting seven power plays.

Vancouver defenceman Gudbranson spent nine minutes in the box, including a five-minute penalty he earned after dropping the gloves with Calgary’s Travis Hamonic midway through the first period.

The Flames and Canucks will have a rematch Saturday in Calgary, the first stop in a six-game road trip for Vancouver.