A new charity set up by Ottawa Senators captain Erik Karlsson and his wife Melinda launched Sunday night with a walk to raise funds for anti-bullying programs in Ottawa schools.

“Thousands of kids and teenagers deal with this on a daily basis and most of them don’t have the support to deal with it,” Erik said during his opening remarks.

The $50,000 raised will go to the Ottawa organization Proud To Be Me and will be used to offer six-week anti-bullying workshops in local high schools.

It will also help put “buddy benches” on the playgrounds of Ottawa elementary schools, said Proud to be me CEO Cindy Cutts. 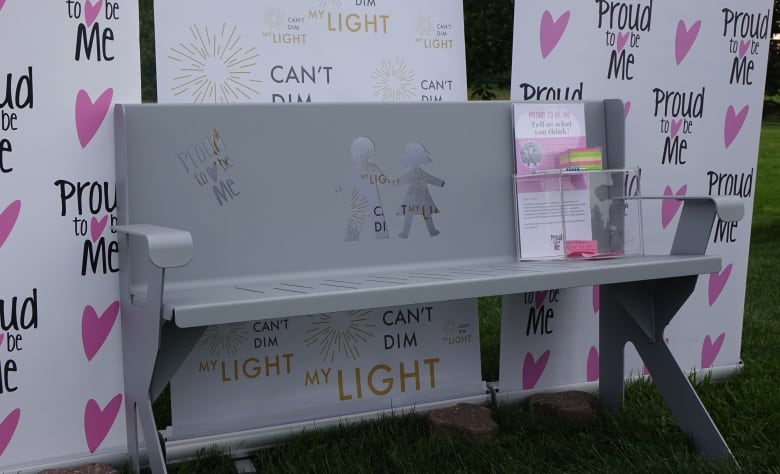 The Ottawa organization Proud To Be Me is hoping to place these “buddy benches” at elementary schools across the city. (Dominique Degre/Radio-Canada)

She said the bench initiative is especially important for elementary-age children — when someone sits on one of the benches during recess, it signals to others that they’re feeling sad or lonely and could use a friend.

The benches are already in place at several Ottawa elementary schools, though Cutts said they plan to expand the program to all schools in the Ottawa area.

‘It doesn’t just affect the kids’

Many walking had personal stories of how bullying had affected them.

Scott Vernon recalled having a conversation with his middle-school child, who was experiencing bullying at school.

“When I was talking with her this week I remember being bullied at work,” he said.

“This is really important — it doesn’t just affect the kids, it affects everybody.” 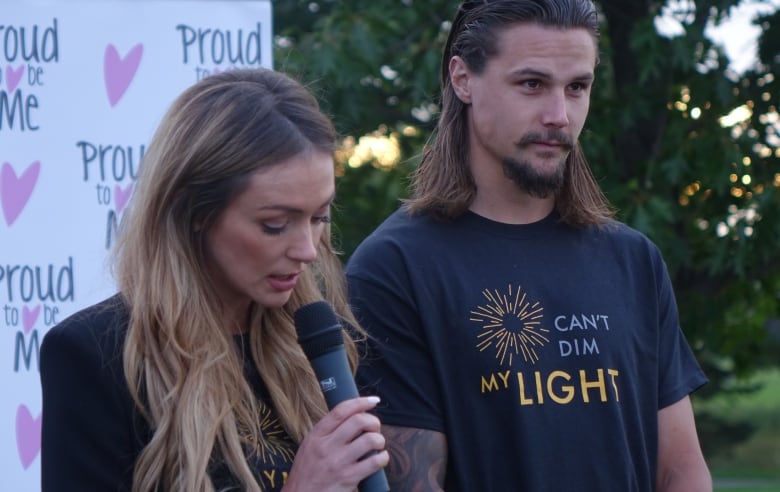 Melinda and Erik Karlsson are hoping to raise awareness about bullying with their new organization, Can’t Dim My Light. (Dominique Degre/Radio-Canada)

City councillor Allan Hubley lost his 15-year-old son Jamie to suicide in 2011 and has been an outspoken advocate of anti-bullying efforts ever since.

During their opening remarks, the Karlssons announced they would be donating two “buddy benches” themselves — one in honour of Jonathan Pitre and the other in the memory of Hubley’s son.

Hubley said the concept of the “buddy benches” may help people realize how important it is to reach out to others.

“Having someone to talk to often makes your troubles feel a little lighter,” he said.

Cutts said she met with Melinda Karlsson over a year ago to discuss how the two organizations might work together.

However, since then, the Karlssons themselves have had a brush with cyberbullying.

The couple said over 1,000 derogatory online comments have been posted about themt — comments they’ve alleged were made by the girlfriend of Karlsson’s then-teammate Mike Hoffman.

Cyberbullying especially is something kids have a tough time dealing with, Watson said, because it follows them wherever they go.

“You come home [from school] and you open up your laptop and there is bullying all over again,” he said.

“I think we have to do a better job as a society letting people know that there is help available.”