Numbers-wise, anyway. Perception-wise, their reputation is rapidly rising, too.

The Colorado Avalanche’s top unit has a combined 55 points so far this season. That’s the most points of any three teammates in the NHL, regardless of line. As for the unit next to them, it would be Boston’s trio of Patrice Bergeron , David Pastrnak and Brad Marchand with 44 points.

Landeskog recently took a hard-line stance when asked about the topic of top line combinations, telling the home crowd in a TV interview after a win that his fast-flying squad was indeed the best in the league.

“A fun line to watch ,” Tampa Bay coach Jon Cooper recently said. “You pre-scout the games and you take your opposing coach hat off and just admire their line.”

Avs storm back to down Sens:

It all starts with MacKinnon, the all-star centre who’s considered one of the speediest skaters in the league. He’s so quick his fellow linemates worked diligently in the off-season in order to not only keep up with him but to stay ahead of everyone else in hockey. Landeskog resorted to pushing around a heavy sled in workouts to get more explosive on the ice. At six-foot-one, 215 pounds, he’s trying to find the right balance to be physical in the corners but still stay swift.

The early results are in: The Avalanche captain appears a step faster.

“Passing the eye test is half the battle,” cracked the 25-year-old Landeskog, who has 10 goals and six assists. “I feel good, no doubt. I feel really good.”

Rantanen has been on track all season — thanks, in part, to his off-season track sessions. Two times a week, Rantanen would head to a track in Finland for the same sort of workout: Sprints of 20 and 30 metres over and over. The workouts were no more than 40 minutes, but the high-intensity drills did the trick.

“I feel better on the ice. My first couple of steps, I feel faster,” said Rantanen, who turned 22 on Monday and leads the league in points with five goals and 16 assists. “I think there are still things I can work on and maybe get better next year. But I definitely think I’m faster than last year.”

MacKinnon looks like he’s taken his game to an even higher level, which isn’t an easy endeavor given a 97-point season in 2017-18. His 18 points (nine goals, nine assists) are ahead of his pace from last season, when he didn’t reach this kind of point production until mid-November. 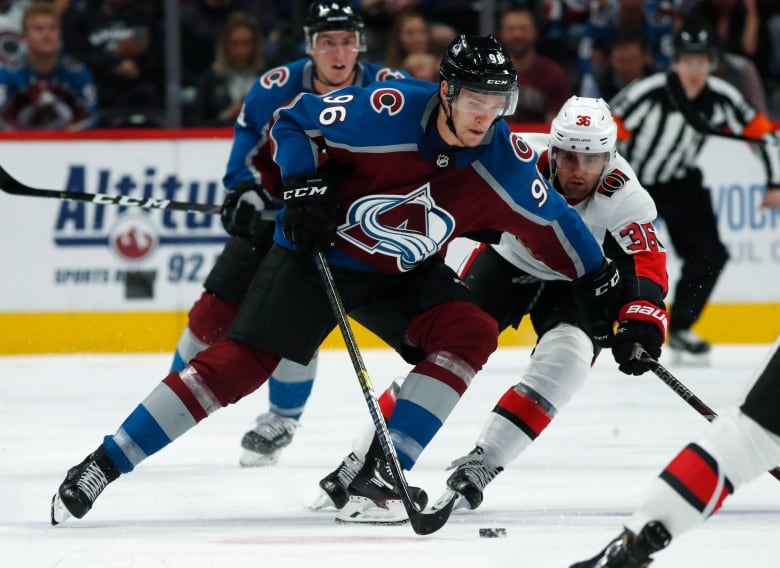 “Keep doing what I’m doing,” said the 23-year-old MacKinnon, whose team is tied for the most points in the Western Conference after 12 games (7-3-2, 16 points). “Keep getting better with the little things. Just be very consistent every night.”

When they’re clicking, games like this are possible: A combined 10 points in a 6-3 win over Ottawa on Friday. That sort of offensive production certainly left an impression on the Senators.

“They do everything right. They cycle the puck, they don’t make turnovers at the top of the blue line and they get everything low,” Senators right winger Bobby Ryan said. “They attack from a lot of different angles. They keep you guessing.”

“They’re all coming into their own,” former Avalanche and current Senators forward Matt Duchene said. “I look at a guy like Mikko and the steps he’s taken. They’re unbelievable. I mean, that’s a line you’ve got to contain.”

In Bednar’s estimation, his top line’s exploits boil down to one thing: a willingness to pass just as much as shoot. It makes them that much harder to defend.

“All three of them see the ice really well,” said Bednar, whose first line accounts for 50 per cent of the team’s points. “The one other thing that doesn’t get talked about a lot is just the hunger all three of those guys have to move themselves forward in their careers and move our team forward. That’s important.”

Although the top unit in Boston generates plenty of headlines for its play, the trio in Colorado is starting to get their fair share of attention around hockey circles, too. Landeskog was the league’s first star last week and Rantanen was named the league’s third star on Monday.

“It’s fun,” Landeskog said. “At the same time, you take the good with the bad. You know how tough it can be at times when things aren’t going your way. So you have to enjoy it while you can.”