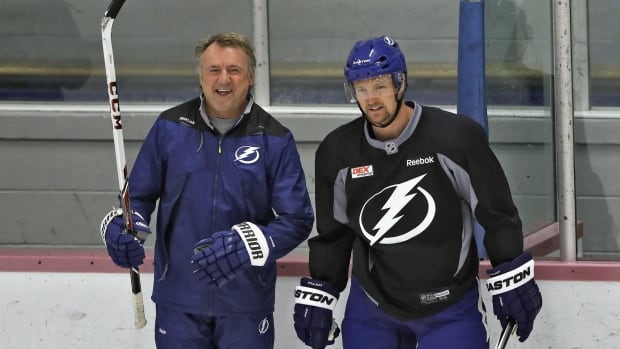 When longtime hockey coach Rick Bowness parted ways with the Tampa Bay Lightning two weeks ago, he was faced with a big decision.

Was it time for the 63-year-old from Grand Lake, N.S., to step away from pro hockey after more than four decades and retire? Or should he give it one more shot with another National Hockey League team.

Since his departure from Tampa Bay, where he was an associate coach, Bowness says three NHL teams have contacted him.

“The time for retirement will come but I don’t think it’s right now,” said Bowness, now back at his home outside of Halifax near the Oakfield Golf and Country Club, where he is a longtime member. “I still have the desire to win the Stanley Cup.”

In his 43 years in pro hockey the Stanley Cup has eluded him. Twice he coached in the NHL final and lost.

He was with the Lightning when their 2015 playoff run ended against the Chicago Blackhawks in six games.

But the most painful memory of his coaching career came back in 2011. Bowness was an assistant to Vancouver head coach Alain Vigneault when the Boston Bruins stormed back to win two straight games to beat the Canucks in a seven-game series.

“There are options out there for me, but I only want to coach with a team that I feel has a chance to win the Stanley Cup,” said Bowness, who has coached in an NHL-record 2,284 games.

“I’m well past the stage in my career where I want to go into a team that is developing or retooling.”

He played 173 games in the NHL for Atlanta, Detroit, St. Louis and Winnipeg from 1975-81. He played hundreds more games in the minor leagues before ending his playing career in 1984.

He was a player-coach with the AHL’s Sherbrooke Jets in 1982-83. His first opportunity as an NHL coach came as an assistant with Winnipeg in 1984-85.

But for a few AHL seasons in Moncton and Maine, he has been in the NHL ever since he retired as a player. He has been a head coach with Winnipeg, Boston, Ottawa, Phoenix and the New York Islanders.

While the Stanley Cup has stayed out of his grasp, one of his three children has won it.

Ryan Bowness, now 37, is a scout with the Pittsburgh Penguins and brought the Stanley Cup back home to Halifax last summer.

“I was a little envious of him, for sure, but obviously I was very proud and very happy for him,” said Bowness, who joined Tampa’s coaching staff in 2013. “We had a big party here with the Cup and even if I don’t win one, at least having him win it would take away a little bit of the sting.”

Bowness wouldn’t say which NHL teams have been in touch.

There are several teams with coaching vacancies and most clubs like to have their coaching teams intact long before training camps open in the fall.