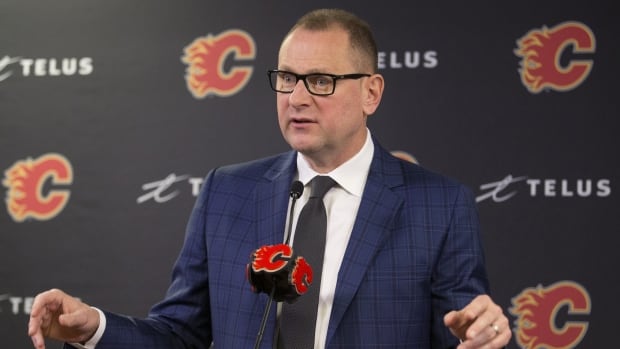 The thought of the Calgary Flames playing games without fans in the Saddledome makes Brad Treliving shudder.

The Flames general manager says he and the players would accept that scenario, however, if that was a way to complete the 2019-20 season currently on pause because of the COVID-19 pandemic.

“You’re sitting here and you’ve got a season that’s incomplete,” Treliving told reporters on a video conference call Thursday. “Whatever way, shape of form that is, you want to complete it.

“It’s hard to walk into a building and think there’s going to be no fans. Especially in the playoffs, the atmosphere and the energy, that’s a big part of that time of year.

“It would be very, very strange and the only reason you would do it is because you have to do it.”

The business of sport requires gatherings of thousands of people.

The virus that has infected over 2.1 million and killed over 141,000 worldwide has shuttered leagues and darkened stadiums.

Under what conditions games could be played, when a vaccine isn’t predicted to be available for months, is the burning question facing the sports industry.

The NHL, NBA, NFL, Major League Baseball, tennis, golf and soccer leagues around the world are all contemplating competition without fans as an option that might satisfy public health authorities.

But atmosphere aside, no fans in the stands also means no ticket, concession or parking revenues.

“Certainly from a business perspective, when you look at it through that lens, it’s really difficult,” Treliving said. “Ticket revenue drives a large portion of our revenue.”

The NHL has extended its self-quarantine order to players, coaches and staff to April 30.

When the NHL suspended operations March 12, the Flames were in playoff position with a 36-27-7 record. Calgary was third in the Pacific Division and four points back of the Edmonton Oilers.

The regular season was scheduled to end April 4 followed by the start of playoffs four days later.

No Flames players or personnel have had COVID-19 symptoms or been tested for the virus, he said.

The City of Calgary’s ban on public events until June 30 includes Flames games.

If and when the NHL gets the green light to resume the current season, Treliving considers a training camp mandatory.

“We’re going on five, six weeks of players not skating,” the GM pointed out. “You’re going to need a training camp of some description and you’re going to need some time to get guys back into game shape, get reps, so we don’t all of a sudden jump right in the pool here and have a bunch of injuries.”

‘Very, very committed to try to complete this season’

So the runway to complete the regular season and playoffs and not run up against the 2020-21 season becomes shorter by the day.

“I think it’s probably not realistic, hopeful, but probably not going to have four rounds best of seven [in the playoffs] to determine a champion,” Treliving said.

“The communication we’ve had from the league is they’re very, very committed to try to complete this season.

“There’s a big asterisk with, ‘we don’t know what that entails and we’re going to take our direction from the health authorities.”‘

When the NHL resumes, Treliving expects changes to the way games are operated and played.

“What took place March 11 is not going to happen when we come back,” Treliving said. “It’s going to look different than it was when we left.

“I don’t know all the things that’s going to go under that, but you talk about fans, no-fans, we talk about all sorts of things. There’s certainly a lot of hurdles to cross.”

He’s even wondered if players might be required to wear full plastic shields or “bubbles.”

“I’ve given some thought to that,” he said. “Where my mind goes to initially is there going to be equipment changes?

“Are you going to be wearing masks? Are we going back to wearing bubbles and those sorts of things? Who knows?”