The parents of a paralyzed Humboldt Broncos hockey player are preparing for the next phase of his recovery — his return home.

Ryan Straschnitzki, 19, is undergoing physiotherapy at the Shriners Hospital in Philadelphia after becoming paralyzed from the chest down in a crash between a semi-trailer and a bus carrying the Broncos junior hockey team at a rural Saskatchewan intersection in April.

He’s expected to return home to Airdrie, just north of Calgary, in a matter of weeks.

His father, Tom Straschnitzki, says he’s already gone through six training programs on how to care for his son once he’s no longer under the constant watchful eye of medical personnel.

The programs include basics of day-to-day care, medication his son is taking and warning signs if something goes wrong.

“Because he can’t feel anything, if there’s a wrinkle, he’ll turn all red and his blood pressure will drop. We’ve got to figure out the signs and try and fix the problem,” said Straschnitzki in an interview at his home with The Canadian Press.

“It’s scary. Hopefully we’ll know what to do and they’ve trained us pretty good.”

Straschnitzki says the family home is about to be renovated to accommodate his son. An elevator is being installed, walls are being knocked down, doorways widened and bathrooms adapted. The reno could take up to six months and, during that time, they’ll need to find a new place to live.

“It’s daunting,” he said. “It’s a lot of work, like building a brand new house.” 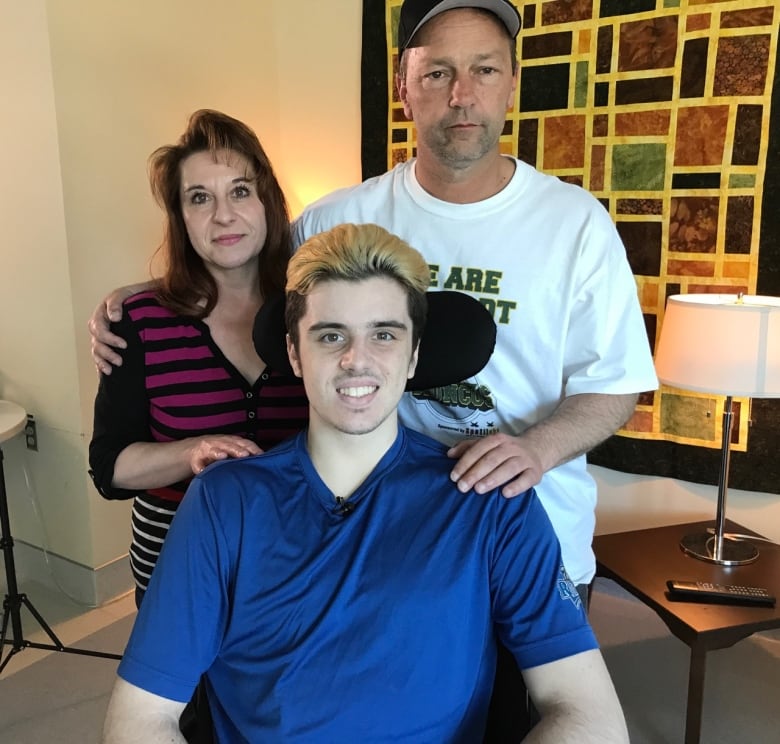 The Straschnitzki family home is about to undergo a major renovation to accommodate Ryan’s wheelchair. In this file photo, Ryan Straschnitzki is pictured with his parents Michelle and Tom. (Susan Ormiston/CBC)

The basement where his son will be living is crammed with souvenirs he collected growing up and a lot more that have come in since the accident.

“That’s Connor McDavid’s stick over there,” Straschnitzki said as he pointed to a corner in the basement. “There’s boxes and boxes of letters and we ran out of room here so we put the rest in his room.”

Two books on the floor included “99” by Wayne Gretzky and “Against All Odds”, the untold story of Canada’s university hockey heroes.

A fundraiser to help with the family’s costs was scheduled for Saturday night at the Genesis Centre in Airdrie.

“Any time you talk to anyone with a spinal cord injury, the first thing they will tell you is the younger you are, the more expensive it becomes, because of the longer time you will live with that injury,” he said.

“If you have the financial wherewithal, the likelihood of you coming out of this with more meaningful movement, mobility and strength to lead a normal life is exponentially higher [than] if you don’t have that ability.”

This time last year, Thompson said, Ryan was focused on playing with a junior A hockey team.

“Now he’s focused on gaining his ability to walk again and gaining full control over his body.”

Sixteen people died, including 10 players, and 13 others were injured as a result of bus crash. RCMP continue to investigate and no charges have been laid.