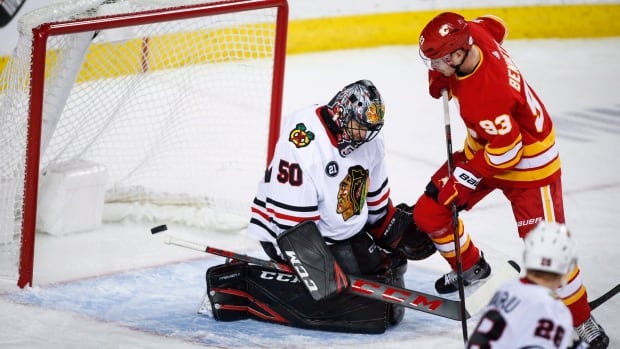 The Calgary Flames stuck to an unconventional winning formula on Saturday night.

For the fifth time this season, Calgary won a game when trailing after two periods as the surging Flames rallied for a 5-3 victory over the Chicago Blackhawks.

“Obviously it’s not ideal to be down in games like we have been,” said Flames centre Sean Monahan, who had two goals to extend his point streak to six games (4 goals, 6 assists). “But we had a lot of good looks and if you play the same way we’re playing, you’re going to get rewarded and that’s what happened tonight.”

Of the other 30 NHL teams, only Anaheim (two) has won more than once when trailing after the second intermission.

Matthew Tkachuk, Michael Frolik, with the game-winner, and Mikael Backlund, into an empty net, also scored for the Flames (9-5-1), who have won four straight. Calgary plays next on Wednesday when it begins a three-game California road trip in Anaheim.

Jonathan Toews, with career goal No. 300, Jan Rutta and Brandon Saad scored for the Blackhawks (6-6-3), who lost all three games on their Western Canada road trip. They’re not in action again until Thursday when they play host to Carolina.

Frolik’s decisive goal came at 15:05 of the third period. His centring pass from below the goal line deflected off a player and got past Chicago goalie Corey Crawford.

“He passed it out front and I put my stick out and one of our guys put out his stick and I didn’t see where it went after that,” said Crawford, who was peppered with 40 shots.

It was the seventh goal for Frolik, who scored only 10 times last year.

After pressing all period, Monahan finally tied it at 13:59 of the third, when he neatly converted a cross-ice pass off the rush from Johnny Gaudreau.

“We had been the better team so far in the game, we had chances and chances, and we knew we were going to get one,” said Tkachuk, whose goal at 18:26 of the second got the comeback started, drawing the Flames to within one with 20 minutes to go.

Calgary’s top unit of Monahan, Gaudreau and Lindholm were the best line all night.

“They were real good,” said Flames coach Bill Peters. “Johnny had the pucks lots, [Lindholm] had unbelievable looks, [Monahan] ended up with a pair, and at the end of the day, they were playing against real good players.”

“You can’t give up that many chances in the third and expect to come out with a win,” said Saad. “Yeah, they got a lucky bounce on that fourth goal there, but they created their own luck. They were working hard. They had the puck possession. We fell into a shell.”

Flames goalie David Rittich got the victory to improve to 4-1-0.

‘They just put so much pressure’

“They just put so much pressure. They kept coming. A lot of speed. They were making plays. They had a lot of confidence there in the third,” Crawford said.

Calgary opened the scoring at 4:46 on the power play when a lightning-quick passing sequence was finished off by Monahan in the slot.

The Flames got an early five-minute man advantage when Duncan Keith was given a boarding major and game misconduct just over two minutes in, when his hit from behind on Dillon Dube sent the rookie head first into the boards.

Dube left the ice on his own, but very slowly. He did not return although Peters said post-game that he thought he’d be OK.

Chicago tied it on Toews’ power-play goal then took its first lead on Rutta’s wrist shot through a crowd with 27 seconds left in the first period. Saad made it 3-1 at 12:41 of the second on a breakaway.